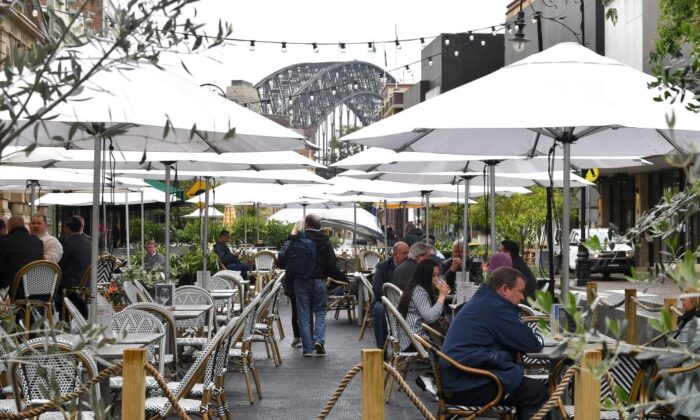 People enjoy their drinks in Sydney on October 11, 2021, as the city ended their lockdown against the Covid-19 coronavirus after 106 days and restaurants began throwing open their doors to anyone who could prove they were vaccinated. (Photo by Saeed Khan/AFP via Getty Images)
Australia

‘We Could Walk Away With Nothing’: NSW Business Hit Hard by Omicron

But since the Omicron strain tore through Sydney two months ago, the Bondi Beach shop is losing money every day just by keeping its doors open.

“We may as well be in lockdown,” said owners of 21 years Jane Turner, who added that the business is in the worst position it has ever been in.

“The accountant’s said you’ve probably got six months at this rate,” she told AAP. “We’ve already ploughed through all our savings… We could walk away with nothing.”

The store has cut back the opening hours in half during the pandemic, yet it is still struggling to stay staffed as half of the employees had to isolate themselves after contracting the virus or becoming a close contact.

While the landlord and regular customers have been exceptionally generous, patronage has reduced, and people are very hesitant to come out, Turner added.

She noted that without government support, “it’s just not looking great”.

“I understand that government’s not a bottomless pit… no one wants our children to be paying off this huge debt,” she said.

Coffee roasters Mecca Coffee also felt the burden. Short staffing and waning support from the community amid the Omicron outbreak have left the cafe arm of the business in dire straits. The distribution side is also struggling to stay afloat.

“Cafes and bars are the pulse of the economy, and when they’re quiet, we’re quiet,” head roaster Daniel May told AAP. “That has a flow-on effect for us.”

Their store in the heart of the “ghost town” of Sydney’s CBD has remained shut, while their Alexandria store only operated with a limited takeaway-only menu on offer, having closed its 50-to-60 seat dining space.

“It almost feels a little bit worse than lockdown,” May noted, “Maybe that’s just more of a psychological thing—knowing that you’re able to be open but having to close.”

He noted that businesses, particularly those in the hospitality sector, would appreciate more support.

The NSW government is due to introduce a relief package to assist small businesses later this week.

Last year, the state and the federal governments both provided support packages to businesses that lost more than 30 percent of their turnover, but the Commonwealth government had since ruled out more JobKeeper payments.

“Everyone was expecting that the rapid spread of Omicron would have a significant adverse impact on Christmas trade, but few would have predicted it to be this extreme,” CreditorWatch CEO Patrick Coghlan said.

“You can’t blame people for wanting to stay at home. We can only hope that the peak arrives soon, and the business community can get back on its feet.”

AAP and Rebecca Zhu contributed to this report.