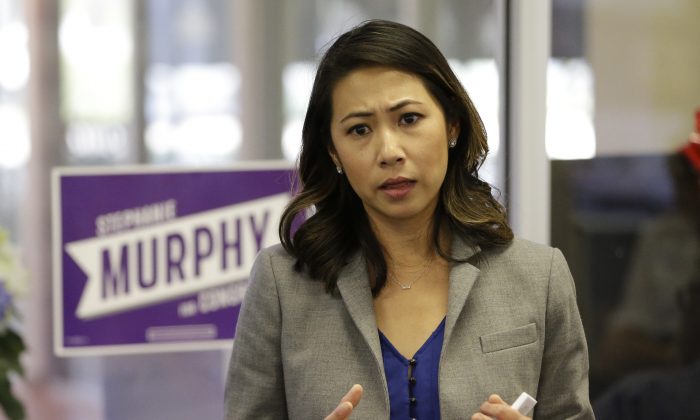 ‘We Can’t Afford to Do Everything’ In $3.5 Trillion Budget: Democratic Congresswoman

The expansive budget was advanced by Democrats during an emergency session of the House on Aug. 24. It has since been the top priority of Democrats across various House committees to write and markup the bill before going back to the floor for another vote in the House. After this, it will need to get through the Senate, where moderate Democratic Sens. Joe Manchin (D-W.Va.) and Kyrsten Sinema (D-Ariz.) have expressed vocal opposition to the legislation’s expensive price tag. Because of this, a prime concern for Democrats while rushing to draft the legislation has been to ensure that the bill can win the support of moderates in the upper chamber.

‘Not Gotten the Text of the Legislation’: Murphy

To pass the legislation through the Senate, Democrats are using the reconciliation process. This process is a parliamentary procedure that allows certain financial bills to advance through the Senate by a simple majority under certain conditions.

Murphy said that she accepts the process is necessary to overcome “Republican obstruction.” But because of this party-line maneuver, the congresswoman insisted that “it is critical [Democrats] legislate in a thorough and transparent way—even though, and I think especially because Democrats are proceeding on our own.”

The legislation was initially advanced to the Senate from the House on a thin party vote without any Senate Republican support. In the House, a contentious hours-long debate ended with the advancement of the bill; With the entire House in attendance, Democrats unanimously voted for the legislation while Republicans unanimously opposed it.

Murphy emphasized that Democrats should be focused on “produc[ing] a good bill that can actually become law,” referencing continuing challenges in the Senate.

Both Manchin and Sinema have been hesitant about the price of the bill rather than its programs. In an opinion piece for the Wall Street Journal, Manchin called for a “strategic pause” to give lawmakers time to examine the legislation. This is necessary, wrote Manchin, to “allow for a complete reporting and analysis of the implications a multitrillion-dollar bill will have for this generation and the next.” A spokesman for Sinema was even more emphatic that the senator “will not support a budget reconciliation bill that costs $3.5 trillion.”

With this intention in mind, Murphy went on to criticize the lack of transparency on the bill, claiming that members of the Ways and Means Committee have not gotten the text of the legislation or Congressional Budget Office’s (CBO) analyses of several subtitles of the legislation.

“To date, I’ve only received the text of subtitle A through subtitle E,” she said. Members of the Ways and Means Committee, she said, have not received either the CBO ratings of any of these other than subtitle B. “In fact,” she continued, “I don’t even know how many more subtitles there will be.”

Murphy then listed a slew of important policies about which the committee had little information. “We haven’t seen the subtitle on prescription drug policy, or the subtitle that will strengthen tax incentives to promote clean energy and combat climate change, nor,” she said urgently, “have we seen the revenue subtitle that will pay for all of this.”

Democratic leadership has insisted since its inception that most if not all of the bill would be paid for by increasing taxes on the wealthy and on corporations. While some committees in the House have revealed how they would spend their portion of the funding, thus far no information has been released on the specifics the bill would use to raise revenue. Murphy insists that she and other members of the committee are just as in the dark on these mechanisms.

In part, Murphy blamed these problems on the “rushed deadline” to finish the legislation, which she said was “driven by politics rather than policy.”

The current deadline for writing, marking up, and passing the bill is Sept. 27, cemented by an agreement Pelosi made with moderate members of the Democratic caucus. The agreement came after a weeks-long divide between the party’s progressives and moderates. Progressives, controlling nearly 100 votes of the party’s 212 members, refused to vote for the moderate-supported infrastructure bill before voting on and passing the budget; Moderates, on the contrary, refused to vote for the budget before passing the infrastructure bill.

To overcome this impasse, Pelosi promised consideration of the infrastructure bill before the end of the month. But this has left Democratic lawmakers scrambling to draft, gather support for, and pass the bill. In total, they had ten legislative days and a little more than 20 out-of-session days to pull off this feat.

“Despite the best efforts of this committee, I find myself in an impossible situation,” Murphy said, “I can’t properly evaluate the investments in subtitle A through E, no matter how worthwhile they appear in isolation, with the incomplete information I have.”

“I cannot assess them if I don’t know how we’re paying for them,” the congresswoman continued. She admitted, “I don’t think we can afford to do everything.”

Murphy argued that she needs to see the bill in its entirety before voting on any part of it—that, she said, “is asking for the absolute minimum.”

In view of these flaws, Murphy said that “unless something changes, I have no choice but to vote ‘no’ on each subtitle and on final passage.”

Concluding her comments, Murphy once again emphasized that the rushed nature of the proceedings to pass the legislation would doom the bill in the Senate. “After all, it is only the bills that become law that improve the lives of our constituents.”