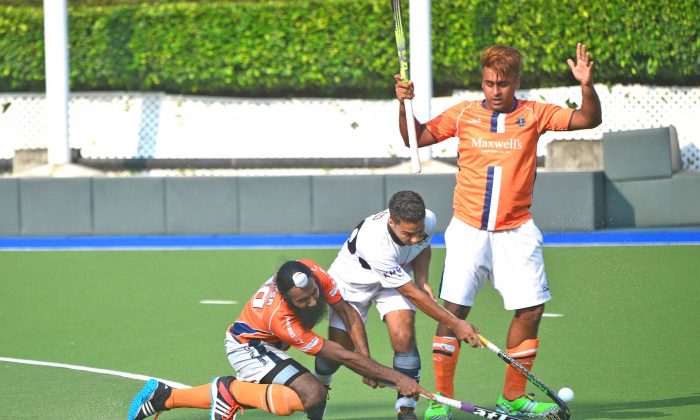 HONG KONG—Singh Sabha Sports Club-A (SSSC-A) ambushed all-conquering Khalsa-A for the 2015-16 Holland Cup title at King’s Park on Sunday May 15 in a 4-2 thriller, thanks to their brilliant captain Muhammed Imran, as he used his vast experience to full use to lead his side to victory.

Khalsa-A, just newly crowned Premier League champions, and winners of this season’s Guru Nanak title were looking to the Holland Cup as icing to yet another successful season.

The many fans that had travelled to the Wiley Road hockey pitch to watch their Khalsa-A heroes grab another victory were given a rude awakening when SSSC-A stormed into the lead, with some awe-inspiring hockey that had many fans applauding in a matter of minutes after the opening whistle. The initial goal came from a Kulvinder Singh deflection and this was followed by a Salman goal for a 2-0 lead going into the break. Khalsa-A battled onwards and pulled one back through Inderpal Singh, the first of a brace, only for SSSC-A to grab a 3-1 lead through Saman, for his double, while Inderpal netted his second of the evening but it was a case of a little too late.

The Singh Sabha club continued to dominate as they pressured Khalsa-A and did not allow them any leeway to  impose their influence or get back into the game. Their tactic worked as Khalsa’s game was error prone as the pressure was applied. SSSC added a 4th goal through Abbu to make the final score 4-2.

Imran, aged 36, is no stranger to big matches having quit the Pakistan national team captaincy to allow younger players to come through. His influence on SSSC-A was evident as his side played with boosted confidence compared to their previous games this season, most notably against Khalsa-A.

With 270 plus caps for his country and 193 international goals, especially coming from a defender, you know he is someone with talent who knows what he is talking about and not one to be taken lightly.

“After realizing we had no chance of the [Premier] league title, we spoke about winning a title and the only one available was the Holland Cup so I told our players we are more than capable of doing [winning] this,” Imran said.

His charges all worked hard as a team pouring over videos and other information on their previous games with Khalsa-A in their search for chinks in their opponents armor. They watched videos of international matches to develop best tactically to take on Khalsa-A and all their hard work paid off handsomely.

“We spent more than two months in harder training, concentrating on the physical as well as tactical elements of our game as we know who our opponents are, player for player,” Imran said.

Dev Dillon, Khalsa-A captain was philosophical about the defeat, ‘we weren’t as ruthless as normal. SSSC-A took their chances and we didn’t, regardless, congratulations to SSSC-A, you have to take your (goal) chances, and they did.

“Overall it’s been a good season for us. We won the league by a nine-point margin and that’s a fantastic achievement. Today was a cup final and as in all Cup finals anything can happen and unfortunately it wasn’t our day.