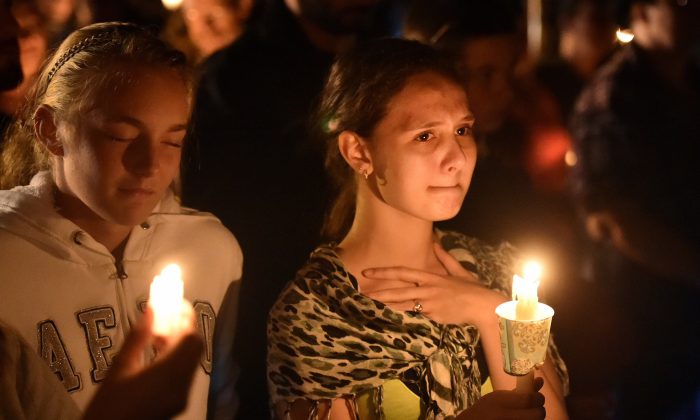 A young woman reacts during a vigil in Roseburg, Oregon on October 1, 2015, for ten people killed and seven others wounded in a shooting at a community college in the western US state of Oregon. (Josh Edelson/AFP/Getty Images)
US

ROSEBURG, Ore.—The 26-year-old gunman who opened fire in a community college English class, killing nine, was a boot camp dropout who studied mass shooters before becoming one himself.

Christopher Sean Harper-Mercer, who died during a shootout with police, wore a flak jacket and brought at least six guns and five extra ammunition magazines to school for Thursday’s rampage. Investigators said Friday they found another seven guns at the apartment he shared with his mother.

The weapons had all been purchased legally over the past three years, some by him, others by relatives, said Salinas Nunes, assistant field agent in charge for the Seattle division of the Bureau of Alcohol, Tobacco and Firearms.

Those who knew him described a deeply troubled loner.

At a different apartment complex where Harper-Mercer and his mother lived in Southern California, neighbors remembered a quiet and odd young man who rode a red bike everywhere.

Reina Webb, 19, said the man’s mother was friendly and often chatted with neighbors, but Harper-Mercer kept to himself.

She said she occasionally heard him having temper tantrums in his apartment.

“He was kind of like a child so that’s why his tantrums would be like kind of weird. He’s a grown man. He shouldn’t be having a tantrum like a kid. That’s why I thought there was something — something was up,” she said.

Harper-Mercer’s social media profiles suggested he was fascinated by the Irish Republican Army, frustrated by traditional organized religion and that he tracked other mass shootings. In one post, he appeared to urge readers to watch the online footage of Vester Flanagan shooting two former colleagues live on TV in Virginia, noting “the more people you kill, the more you’re in the limelight.”

He may have even posted a warning. A message on 4chan — a forum where racist and misogynistic comments are frequent — warned of an impending attack, but it’s unclear if it came from Harper-Mercer.

“Some of you guys are alright. Don’t go to school tomorrow if you are in the northwest,” an anonymous poster wrote a day before the shootings.

On Thursday morning, he walked into Snyder Hall and opened fire, shooting a teacher and students, many repeatedly. Survivors described a classroom of carnage, and one said he ordered students to state their religion before shooting them.

Students in a classroom next door heard several shots, one right after the other, and their teacher told them to leave.

“We began to run,” student Hannah Miles said. “A lot of my classmates were going every which way. We started to run to the center of campus. And I turned around, and I saw students pouring out of the building.”

Portland Fire and Rescue Lt. Rich Chatman, who is serving as a spokesman for the criminal investigation, said investigators were still processing the crime scene.

“As you can imagine, there is a tremendous amount of information and evidence for them to sort through,” he said. “We have a very large team of investigators and forensic teams trying to process all of the information.”

Chatman said several hundred investigators are involved, ranging from federal agencies such as the FBI and ATF to state, county and city law enforcement.

Several years ago, Harper-Mercer moved to Winchester, Oregon, from Torrance, California, with his mother, a nurse named Laurel Harper. His father, Ian Mercer, originally from the United Kingdom, told reporters outside his Tarzana, California, home, “I’m just as shocked as anybody at what happened.”

At school in Oregon, “he was a typical Roseburg kid, kind of nerdy, kind of out there. Just himself,” said Alex Frier, a stage manager at Umpqua Community College who said Harper-Mercer built sets for theater performances last semester.

A neighbor, Bronte Harte, said Harper-Mercer “seemed really unfriendly” and would “sit by himself in the dark in the balcony with this little light.”

Harte said a woman she believed to be Mercer’s mother also lived upstairs and was “crying her eyes out” Thursday.

The Army said Harper-Mercer flunked out of basic training in 2008.

Army spokesman Lt. Col. Ben Garrett said Harper-Mercer was in the military for a little over a month at Ft. Jackson, South Carolina, but was discharged for failing to meet the minimum standards.

Garrett did not say which standards Harper-Mercer failed. Generally, the Army requires recruits to pass physical fitness tests and to be in generally good physical and mental health. Recruits must also pass a multiple-choice test covering science, math, reading comprehension and other topics.

Douglas County Sheriff John Hanlin has said repeatedly that he and his deputies are not going to say the shooter’s name because that’s what he would have wanted.

“I will not name the shooter. I will not give him the credit he probably sought prior to this horrific and cowardly act,” said a visibly angry Hanlin.

Hundreds went to a candlelight vigil Thursday night, with many raising candles as the hymn “Amazing Grace” was played.

“That’s all I could think about today. There’s 10, 9 kids who won’t get those doors opened,” he said.