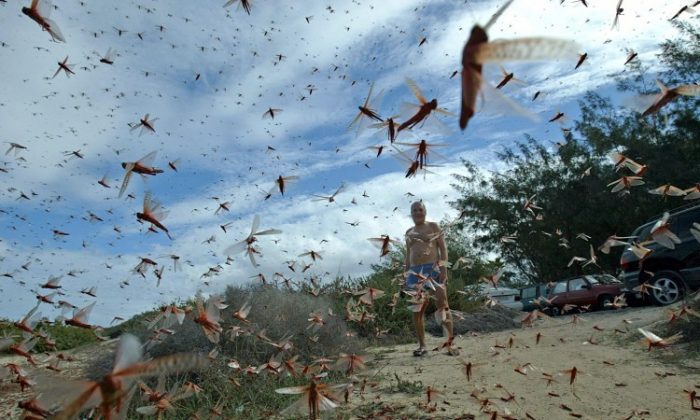 A man stands in a large cloud of locusts, 29 November 2004 around Corralejo in the north of the island of Fuerteventura, in Spain's Canary Islands. (Samuel Aranda/AFP/Getty Images)
International

‘We Are Walking on Locust Carpets’: Plague of Locusts Destroy Crops in Italy

Swarms of locusts have destroyed crops and infested houses on the Italian island of Sardinia in the worst such invasion in 70 years, agricultural association Coldiretti said on June 11.

The locusts have devastated animal grazing pastures covering some 2,500 hectares (6,200 acres) of land in the central province of Nuoro, between the small towns of Ottana and Orani, Reuters reported.

“We are walking on locust carpets,” Coldiretti said in a statement.

According to DW.com, the locusts have destroyed some 6,200 acres of farmland in Nuoro.

Locusts are often seen in Sardinia during the summer months, but farmers said it was the worst outbreak since the end of World War Two and was mainly due to odd weather patterns over the past two years.

“We had droughts in 2017 and a lot of rain in 2018, the ideal climate for locusts to emerge from fallow land and then move to cultivated fields to eat,” said Michele Arbau, from Coldiretti Sardinia.

LOCUST INVASION: Sardinia is seeing its worst outbreak of locusts in 70 years.

The infestation, which farmers say is due to recent weather patters, is destroying crops and infesting houses on the Italian Island. https://t.co/1TGrPuGnzN pic.twitter.com/CLsjoKlLcL

“There is nothing we can do about it this year,” he told Reuters, adding that there was a risk of even worse infestations next year unless preventive action was taken now.

He said it would be impossible to estimate the cost of the locust swarms until later in the season.

The locusts are forecast to die in August of this year.

According to the U.S. Department of Agriculture, “Locusts are large herbivorous insects that can be serious pests of agriculture due to their ability to form dense and highly mobile swarms. They are species of short-horned grasshoppers that periodically form large populations in dense migrating groups, where individuals differ in several characteristics from those living separately.”

Read More
How Many Locusts Does It Take to Start a Biblical Plague? Just Three
Plague of Locusts in Madagascar Threatens Crops
Locusts Swarm Egypt: Damage Locusts Caused in the Past 100 Years
Locust Outbreaks in South Eastern States of Australia
Madagascar Preparing for Locust Plague
Locusts—Blight or Bite?

The agency noted that locusts, which are one of the 10 plagues mentioned in the biblical book of “Exodus,” aren’t the same as grasshoppers.

“Locusts and grasshoppers are the same in appearance, but locusts can exist in two different behavioral states (solitary and gregarious), whereas most grasshoppers do not. When the population density is low, locusts behave as individuals, much like grasshoppers. However, when locust population density is high, individuals undergo physiological and behavioral changes, known as phase polyphenism, and they form gregariously behaving bands of nymphs or swarms of adults,” the USDA says.

It adds: “The distinction between locusts and grasshoppers is often not clear-cut, as the extent to which different species exhibit gregarious phase characters is graded. The migratory locust has all of the features associated with phase change – differences in body shape and color, fertility and gregarious behavior in both the nymph and adult life stages, forming dense bands and swarms. The Australian plague locust also forms dense nymph bands and adult swarms, but does not exhibit changes in body color. Spur-throated locust nymphs do not form bands and the adults do not lay eggs gregariously, but they do form dense swarms.”