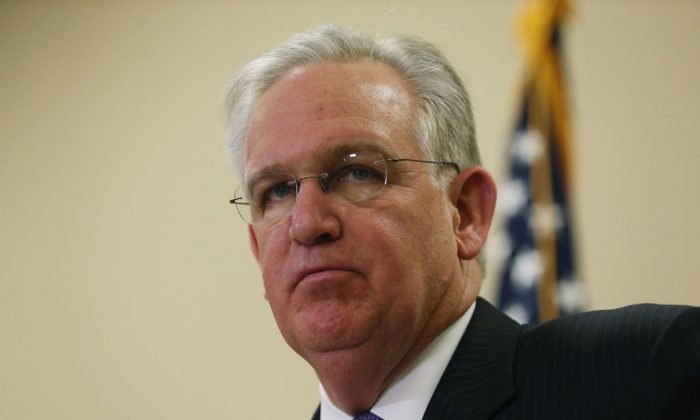 Missouri Governor Jay Nixon speaks to the media after announcing a 16-member Ferguson Commission on Nov. 18, 2014 in St. Louis, Missouri. The 16 member commission is being brought together to study issues that have arisen since the fatal police shooting of Michael Brown. (Joe Raedle/Getty Images)
The Reader's Turn

We Are St. Louis, Too

My St. Louis is Black and White and Christian. It is also Asian, Bosnian, Middle Eastern, Latina, Native American, Muslim, Jewish, Hindi, and so much more.

For the last 100 plus days, St. Louis has been divided. And it is usually represented as a Black and White issue. But the voices of the “other” category are being lost and ignored.

I am Asian. I have lived in St. Louis since I could talk. I love my city. I want it to heal and progress. But I firmly believe there will be no real healing in Ferguson and beyond if Jay Nixon and others continue to ignore our voices.

Like others who don’t fit the Black and White binary of St. Louis, I marched alongside the protesters, listened to the debates, and cried when I saw the abysmal treatment of my St. Louis peers.

Just as much as every Black or White St. Louisan, I want our city to heal, find justice and peace, and move forward together. But I don’t see this as a possibility if the government continues to systematically ignore my existence and that of my sisters and brothers, aunts and uncles, grandmothers and grandfathers who also find themselves invisibly caught in the ignored spectrum between Black and White.

We are the shades of gray in a complicated issue. We are St. Louis, too.