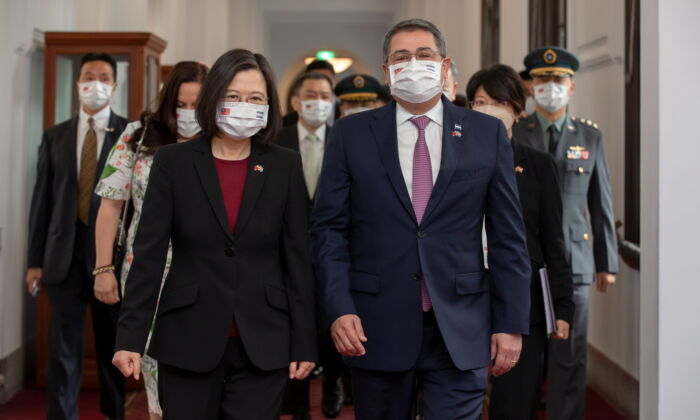 ‘We Are Real Friends,’ Honduran President Says on 4th Visit to Taiwan Before Leaving Office

The president of Honduras said on Nov. 13 that he hopes that his country will continue its friendship with Taiwan even after he leaves office, with his comments coming as the Central American country might switch its diplomatic recognition to Beijing.

“We are real friends,” Juan Orlando Hernandez told Taiwanese President Tsai Ing-wen on the second day of a three-day surprise visit to Taiwan. “Only real friendship can be seen at difficult times.

“We hope to deepen such friendship and diplomatic ties either within or after my presidency.”

Hernandez, who is completing the second of his two four-year terms, is due to leave office in January.

Hernandez visited Taiwan as president in 2015 and 2016, after a previous visit as the speaker of the Honduran Parliament in 2010, according to the Taipei-based Central News Agency.

Tsai called Hernandez’s arrival “significant,” because it was the first trip made by any of Taiwan’s Latin American allies since the COVID-19 pandemic. Tsai said she hopes that the two countries will continue to “help each other” on the international stage.

Even as the meeting celebrated 80 years of diplomatic relations between the two nations, their future ties are now in doubt, as Hernandez’s party faces a tough challenge in the Nov. 28 election to retain the presidency.

A leading candidate backed by the main opposition parties in Honduras has vowed to establish an official relationship with the regime in China if elected, which means that the country will no longer recognize Taiwan as an independent country.

Honduras is currently one of just 15 countries that maintain formal diplomatic ties with the self-governed island, which Beijing claims as its territory, to be reunified by force if necessary.

The Chinese regime has been using diplomatic and economic methods to win over the remaining allies. Seven countries changed recognition to Beijing from Taipei between 2016 and 2019. Honduras, among a small number of Latin American countries to maintain diplomatic ties with democratic Taiwan, has been under pressure to switch.

While neighboring nations have received COVID-19 vaccines from Beijing, countries such as Honduras and Guatemala didn’t, although Beijing has denied that the so-called vaccine diplomacy is to gain geopolitical clout.

In a regular session of the United Nations in September, Honduras didn’t vocally support Taiwan’s international inclusion, marking the sixth consecutive year that the Central American ally has refrained from doing so.

Taiwan had accused China of seeking to use the Honduran election to “create controversy” and warned Honduras not to be drawn in by Beijing’s “flashy and false” promises.

“I expect Taiwan and Honduras will continue to support each other and make progress in future developments,” Tsai said on Nov. 13, while expressing her wish for a smooth presidential election.

There has been widespread speculation about Hernandez’s future and whether a Castro government would allow for him to be extradited to the United States, where he’s the target of a narcotics investigation. The president has vehemently denied any links to drug cartels.

Three of Hernandez’s children are currently studying or working in Taiwan, according to Taiwan presidential office spokesman Xavier Chang.