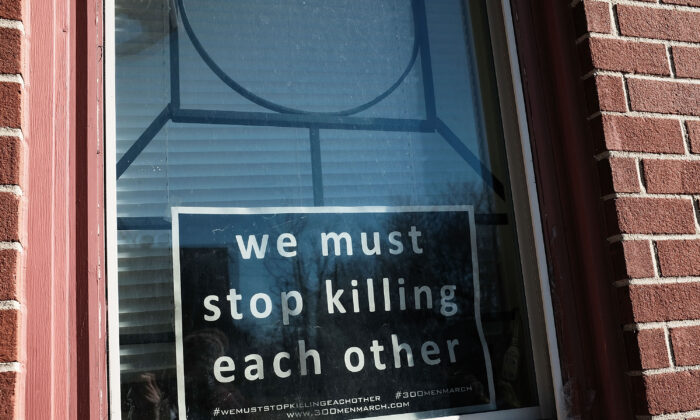 A sign to end violence sits in a window in a neighborhood with a high murder rate in Baltimore, Md., on Feb. 3, 2018. (Spencer Platt/Getty Images)
Viewpoints

We’re Reliving the ‘Lord of the Flies’

In 1954, Nobel Prize-winning author William Golding published the book “Lord of the Flies.” The novel and subsequent movie made from the book deals with a group of British boys who find themselves stranded on an uninhabited island with no adults. The boys try to govern themselves—with disastrous results—as they struggle with emotions, morality, cruelty, and other issues.

As I read about the increased violence in our inner cities, as well as the attacks on innocent people by alienated, unsupervised young men, I can’t help but harken back to Golding’s sadly prophetic novel.

One such example, as reported in a recent City Journal article by Michael Torres, involved a group of seven Philadelphia teens who beat a 73-year-old man to death with a traffic cone. Their heinous actions were caught on surveillance camera, with the footage showing them laughing and recording their brutal assault on the defenseless man. The elderly man’s niece would ask, “Where are the parents?”

The answer is that the parents, and particularly the fathers, are nowhere to be found, so these teens are playing out the scenario of “Lord of the Flies” daily in cities across the United States.

Take Pennsylvania, for example. Torres reported that data from the state’s Juvenile Court Judges’ Commission show that in 2021, more than 80 percent of juvenile court dispositions involved a young person coming from a broken home, with nearly 48 percent being raised by a single parent and only 15.5 percent coming from intact, two-parent families.

These young people, like the boys in “Lord of the Flies,” find themselves stranded with no adults to help guide them and thus have no idea of how to govern their emotions—whether it be anger, sexual desire, or basic regard for human life.

Yet instead of asking the question, “Where are the parents?” many government officials are saying a different phrase: “Show me the money.” That’s the wrong thing to say, because no amount of money can heal the broken soul of a young person growing up without a father or, in some cases, no parents at all.

Manhattan Institute senior fellow Jason Riley said that despite more than $22 trillion dollars spent on so-called Great Society policies over the past 50-plus years, around one out every four U.S. children raised by a single mother live at or below the poverty line. In contrast, for married black Americans, the poverty rate is less than 10 percent.

“The likelihood of teen pregnancy, drug abuse, dropping out of school, and many other social problems grew dramatically when fathers were absent,” Riley said.

In addition, consider a 2021 report by Child Trends on the state of the black family. It found that 64 percent of black children live in single-parent families, with approximately 60 percent of black women between the ages of 15 and 50, either being married or living with an unmarried partner when they had their first child, and approximately 40 percent being either not married or living with an unmarried partner.

Meanwhile, the government continues to throw money at the problem, often subsidizing single-parent families while ignoring the root of the problem.

Perhaps the best explanation of the problem and the solution came from Rev. Eileen Smith, executive director of the South Pittsburgh Coalition for Peace. She understands that money isn’t the issue. Torres quoted her as saying: “We are seeing fearless perpetrators in these young people. We’re seeing young kids who have cold hearts and are not concerned with consequences of any kind. … It is a spiritual problem, along with a lack of home and a lack of love. They’re looking for love in all the wrong places.”

If we’re to stop teenagers—and particularly young men—from reenacting the “Lord of the Flies” in our cities and towns, we need to reemphasize that children need to be raised in two-parent intact families, with both a mother and a father. That’s what government should be encouraging, instead of continuing to bandage open wounds with dollar bills.

Otherwise, we’ll continue to hear the question, “Where are the parents?” when another tragic attack or shooting takes place. It’s my hope that someday we’ll no longer have to ask that question and that it has found its answer: a loving two-parent home regardless of socioeconomic status, which is once again the norm and not the exception.