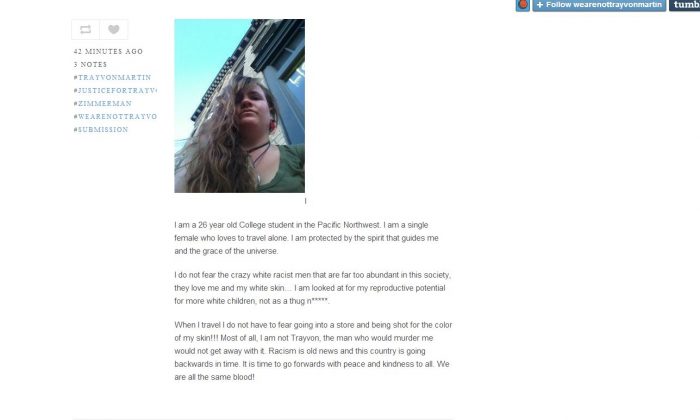 A screenshot show the We Are Not Trayvon Martin site.
Social Media

A Tumblr website called “We Are Not Trayvon Martin” sprung up as emotions were still raw following the acquittal of George Zimmerman in the Trayvon Martin shooting death case.

A number of users–mostly white–posted photos of themselves saying how they aren’t Martin, a 17-year-old black male from Sanford, Fla.

Most of those who posted on the blog talked about the perceived white privilege enjoyed in the United States.

“I am not Trayvon Martin. I can (and do) shoplift whenever I want. If I ever even get caught I feign like I was distracted by talking on my phone and gleefully hand over the money. After all, I’m clearly a middle-class normal-looking white dude. We don’t ever do things wrong,” wrote one user.

Some users posted about perceived injustices in the U.S.

“Trayvon could have been my godson, my nephew, or my student. But he most certainly could not have been me. And unlike that day in my yard, this time, I’m stuck just watching as Zimmerman pulls the trigger – and gets away with it. Stuck watching as they take a life they don’t think anyone that ‘matters; will miss. And I weep. Rest in peace, Trayvon. We miss you,” wrote another.

Many of those who posted offered veiled criticisms of the acquittal, saying it was injust.

Said another: “That is why I stand with Trayvon and his family and everyone who seeks justice – because our justice system needs to be fixed and people need to be educated on accepting us “different” folks as equals. No one should have to die, or be treated like they don’t matter just because they are looked upon as being ‘different’ …”

Zimmerman, a former neighborhood watch volunteer, was acquitted of second degree murder and manslaughter in the Martin case. The decision prompted protests in several cities across the U.S. on Saturday and Sunday.