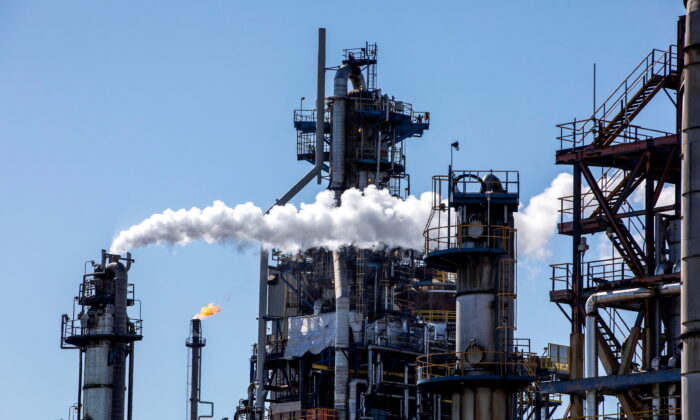 General view of the Imperial Oil refinery, located near Enbridge's Line 5 pipeline, which Michigan Governor Gretchen Whitmer ordered shut down in May 2021, in Sarnia, Ontario, on March 20, 2021. (Carlos Osorio/Reuters)
Canada

We Are Entering an Energy Crisis of Our Own Making

The great green transition from fossil fuels is collapsing as the world enters an energy crisis of its own making.

India and China are scouring the world for coal stocks to burn, while Germany is offering its citizens tutorials on how to cook without electricity in anticipation of power failures. Prices for natural gas, crude oil, and coal are skyrocketing.

The term “energy poverty” was once reserved for the poor in underdeveloped nations. Today, citizens in some of the wealthiest countries on earth are applying the term to themselves.

It’s not even winter yet.

Meanwhile, Canada continues to shut in vast reserves of the resources that the world so desperately wants.

Alberta has shut down all new coal mining developments. British Columbia has regulated every proposed liquefied natural gas (LNG) terminal out of existence aside from one which has faced chronic delays. Quebec has rejected an LNG terminal that had been in the works for nearly a decade and is considering banning all oil and gas development in the province forever.

Meanwhile, the Trans Mountain pipeline expansion is moving at a snail’s pace and remains years from completion.

While Canada has some of the most abundant petrochemical reserves on the planet, we won’t be able to make a dent in this spike in global demand for energy products. We have handicapped our production and export abilities so badly, it will take years to respond to today’s surge in demand.

Leaders Must Drop the Ideology to Face Reality

How did the world get into this mess?

As with pretty much everything these days, the COVID-19 pandemic has a lot to do with it. The lockdowns of 2020 led to depressed demand for energy products. With travel and commerce ramping up again in 2021, energy producers weren’t able to increase production quickly enough to meet demand.

The pandemic has wreaked havoc on world supply chains and fossil fuel delivery is no exception.

Demand shocks induced by the pandemic have exposed just how fragile the world’s energy supply chain has become. Decades of naive, ideological energy policies around the world have led to energy security challenges. Countries set unreasonable emissions reduction targets for themselves in their zeal to battle climate change, while conventional energy generation facilities have been shut down in anticipation of renewable energy breakthroughs that never materialized.

As the cost of oil shot up, U.S. President Joe Biden went cap in hand to OPEC to beg them to increase production. It apparently never occurred to Biden to consider allowing the Keystone XL pipeline to finish in order to bolster stable, domestic supplies.

Meanwhile, Michigan Governor Gretchen Whitmer remains adamant in her bid to shut down Enbridge’s Line 5 though it will cost thousands of jobs and cause local energy shortages.

Canada is little better, as proposed pipelines from Alberta to the East are rejected while foreign tankers deliver oil to Quebec. Absurd virtue signalling through rejecting domestic fuel supplies while purchasing foreign stock has caught up with us. Despite being blessed with an abundance of energy sources, Canada may soon face a similar crunch to Europe as the crisis spreads.

The “greenest” nations of yesterday are the most vulnerable to energy shortages of today, as evidenced by Germany’s plight. Germany was celebrated as an energy transition champion only a year ago. They are expected to increase their coal imports this year if they can get it.

Despite facing a world energy crisis like we haven’t seen since the 1970s, it doesn’t appear that world leaders are getting the message yet. The 2021 United Nations Climate Change Conference is scheduled to be held in Glasgow, Scotland, at the end of October, and the goal is still to reduce the use of fossil fuels at all costs. Those costs are going to be terribly high very soon.

The world is going to have an energy reality check in the next year. Let’s all hope for a mild winter because European windmills and solar farms will not be able to meet energy demands during a cold snap, and they no longer have the gas and coal-generating abilities to fill the gap.

Blackouts aside, the prices for consumer goods will be rising fast. Greenhouses in the Netherlands are already shutting down due to a lack of affordable natural gas. They are the main supplier of winter produce for much of Europe. Fertilizer is rising in cost as its production is reliant on natural gas. Food prices are set to explode while every other product that needs shipment will experience inflated prices.

This year’s energy crisis is unavoidable. It is already in motion.

We can only hope that the world can learn from this and limit this crisis to a single year. Leaders need to drop the ideology and face reality. One day we may indeed transition fully away from fossil fuel use and into renewable means of energy generation, but it’s crystal clear that we aren’t there yet. There is still time to bring our fossil fuel production back up to speed. We can stabilize our energy supplies and retain the high standard of living that we have become accustomed to.

We are entering a crisis of our own making while turning a blind eye to the obvious solutions.

Canada could be well placed to fill world energy needs, but will we let ourselves? I fear not.