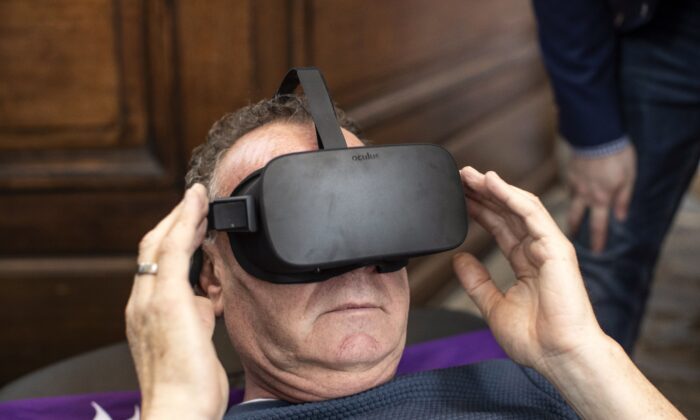 A man experiences the inside of the "Sarco" suicide device through using virtual reality glasses at the Amsterdam Funeral Expo in Amsterdam on April 14, 2018. (Jasper Juinen/AFP via Getty Images)
Viewpoints

We Are Becoming Pro-Suicide

Just what the world didn’t need—a suicide machine that promises to make users die pleasurably in just 30 seconds. Ready or not, it’s here. The Sarco Suicide Pod has been approved for use in Switzerland, a country that already accommodates “suicide tourism,” that is, for-pay clinics that people attend from around the world to be made dead.

The Swiss blessing of the life-extinguishing machine—the invention of the Australian suicide proselytizer Philip Nitschke (more about him below)—received ubiquitous, and mostly noncritical, international media coverage.

For example, Yahoo News described the device as a “3-D-printed portable coffin-like capsule with windows that can be transported to a tranquil place for a person’s final moments of life.” Other than listing the phone number of the National Suicide Prevention Lifeline—1-800-273-8255—no critics were quoted in the story nor were the many pronounced dangers to suicidal people in making self-termination seem desirable, described.

Ditto for the story published in Business Insider, which quoted Nitschke as happily chirping that people will now be able to commit assisted suicide without having “to get any permission.” EuroNews even quoted Nitschke extolling his device as “democratizing the dying process.” Nor is the machine to be restricted to the ill or disabled.

“We consider it a right for all rational adults to be able to divest themselves of their life,” Nitschke said.

Indeed, of the several stories I perused about the Sarco Pod’s approval, only The Washington Post’s included a critic worrying that the machine could glamorize suicide. Alas, that horse is long out of the barn.

Consider the tragic case of Brittany Maynard. Most readers older than 20 will remember the young woman, stricken with terminal brain cancer, who was elevated by the media into an A-list international celebrity after announcing she had moved to Oregon to commit assisted suicide.

How famous did she become? People Magazine featured her at least twice in fawning cover stories and devoted 1,700 words to her obituary—a novel-length tome for that publication. She was lauded by Rosie O’Donnell and Whoopi Goldberg on “The View.” CNN named Maynard one of its “11 Extraordinary People of 2014” because she committed suicide, “dying on her own terms.”

What made Maynard’s suicide so special? The short answer is that she was glamorously beautiful, allowing for her death to be romanticized by the media and for assisted suicide to be popularized. If you doubt me, ask yourself: Would CNN have ever named Maynard “extraordinary” if she weighed 200 pounds, wasn’t white (for the same reason kidnapped white girls almost always get more media attention than those of color), or was wrinkled? Would People have fawned all over her before and after her death? We all know the answer.

That’s not to say the elderly aren’t also the targets of suicide advocacy. Compassion and Choices—which used to be more honestly called the Hemlock Society—teaches people who “decide they are simply ‘done’ after eight or nine decades of a fully lived life” how to starve themselves to death, known in euthanasia parlance as “voluntary stop eating and drinking” (VSED).

Perhaps nothing illustrates society’s increasing acceptance of suicide—with the still clear exceptions of the young and troubled military veterans—than the decades-long love affair the media has had with the suicide pod’s inventor.

For the past two decades, Nitschke has traveled the world holding how-to-commit-suicide seminars, events usually publicized favorably by local press. He also taught people how to obtain veterinarian drugs in Mexico that could be used to commit suicide—a prescription followed by many elderly people—and was again met with nary a word of condemnation beyond euthanasia opponents.

Yes, it is true that stories about Nitschke often call him “Dr. Death”—but not in a condemnatory or sharply critical way. Indeed, he has often been honored, as when he was an invited guest presenter at Edinburgh Festival Fringe—the world’s largest art festival—where he invited people on stage to take a deep inhale of the nitrogen gas used in his suicide pod. How positively avant-garde!

Perhaps Nitschke’s undeserved respectability is best illustrated by what stories about him leave out. In 2001, he gave an interview to Kathryn Jean Lopez in the National Review in which he said that he hoped to concoct a “peaceful pill,” that is, a suicide formula that would be available in supermarkets.

He told Lopez that “all people qualify” for suicide facilitation, “not just those with the training, knowledge, or resources to find out how to ‘give away’ their life,” and that “someone needs to provide this knowledge, training, or recourse necessary to anyone who wants it, including the depressed, the elderly bereaved, [and] the troubled teen.” Teen suicide is still a third rail in society. No wonder the media leave that part out!

But who knows for how long? In 2001, while in Australia on an anti-euthanasia speaking tour, I was featured in a front-page story in The Australian exposing Nitschke for selling “Exit Bags,” plastic contraptions sown with Velcro to tie around the neck and used in conjunction with taking an overdose of barbiturates.

That story helped force Nitschke’s suicide facilitation activities out of Australia—but only for a time. These days, assisted suicide legalization laws are proliferating, including throughout Australia.

In this sense, the positive coverage of Nitschke’s futuristic death contraption is just the next step. The sad fact is that as a culture, our societal opposition to suicide—again excepting the suicides of teenagers and military veterans—is fading rapidly. Almost 50,000 people end their lives at their own hands in the United States every year. It’s the 10th leading cause of death overall and the third among adolescents.

There are abundant reasons for this “public health crisis.” One of them, surely, is that self-destruction, per se, is no longer universally disapproved. In some cases, it’s extolled. For the sick and disabled, it even receives the imprimatur of the state. Unless current trends reverse, I don’t see the ongoing suicide catastrophe ending anytime soon.