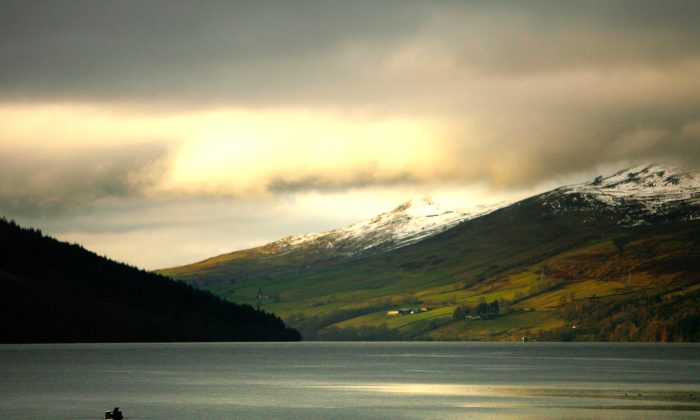 Anglers mark the opening of the salmon fishing season on the River Tay at Kenmore in Kenmore, Scotland, on Jan. 15, 2008. (Jeff J. Mitchell/Getty Images)
News

Freshwater covers a tiny area of the planet’s surface, but is vital for our economies, environment, and, of course, our survival. Yet freshwater is also among the most threatened ecosystems, where wildlife has declined faster than in the oceans or on land.

Faced with a barrage of human threats, how can we help our waterways? Our research, published in Biological Conservation, looks at the cheapest, most effective ways to restore our rivers.

After all, we all live downstream.

According to the United Nations, more than 40 percent of the global workforce is heavily dependent on freshwater. There are strong links between water and jobs across all sectors of the economy—agriculture, fisheries and forestry, energy, manufacturing, and transport.

All ecosystems are connected by water. As a result freshwater is worth trillions of dollars to our economy through various ecosystem services. These include power generation, food and medicine production, flood buffering, and recreation and tourism.

People in the United States alone spend $24 billion to $37 billion each year on tourism activities related to recreational fishing. Likewise, in Australia, freshwater recreation is worth billions of dollars to the economy.

The role of healthy freshwater ecosystems in sustaining wildlife is less celebrated.

Freshwaters cover only about 0.5 percent of the earth’s surface, but are home to nearly 10 percent of all known species, including a third of all vertebrates.

Despite this abundance of biodiversity, freshwater ecosystems are among the most threatened on Earth. According to the World Wildlife Fund’s Living Planet Index, freshwater fish, birds, mammals, and reptiles and amphibians have declined by a whopping three-quarters over the last 40 years. This is significantly more than the declines in ocean and land wildlife.

The International Union for Conservation of Nature Red List reveals that 35 percent of freshwater amphibians are threatened or extinct, 46 percent of mammals, and 38 percent of turtles.

To make the management of freshwater ecosystems even more challenging, these threats often interact in ways that are difficult to predict. These complex and interacting threats are often ignored, leading to poor decisions and ultimately the loss of species.

Habitat loss and degradation are primarily due to deforestation, farming activities and dams. When these activities occur in an upper-catchment area, sediment is carried into rivers and lakes, causing significant negative impacts on freshwater species.

Infrastructure development—including dams and levees—also modifies water flow. There are perhaps one million dams globally, fragmenting rivers into isolated sections. Freshwater species—including fish, molluscs, and reptiles—often can’t adapt to these changes and are at increased risk of extinction.

Pollution is another significant threat to these habitats. Fertilizer runoff from farming and the dumping of industrial pollutants directly into rivers and lakes have resulted in areas so poisoned that they can no longer support their normal range of species.

Invasive species have played a major role in disrupting freshwater ecosystems. The European carp (Cyprinus carpio), for example, is a pest that out-competes native fish. It was first introduced to Australian waterways more than 100 years ago and has spread to every state and territory except the Northern Territory. The federal government has recently taken steps to control carp, by way of plans to introduce a herpes virus.

Climate change presents another threat to freshwater habitats, particularly to those species that can’t migrate or compensate for higher temperatures. In Australia, extreme weather fluctuations and natural disasters such as floods and droughts are projected to become more common, placing freshwater biodiversity under further stress.

As threats intensify and interact in the coming decades, the risk to freshwater wildlife will increase. Vulnerable freshwater ecosystems in Australia such as the Murray-Darling Basin will be particularly susceptible to further loss of species.

So how do we decide what actions to take to best protect and restore our freshwater ecosystems?

Better Bang for Your Buck

We’ve looked at the cheapest and most effective way to address threats, particularly climate change and land-use change. Our research shows that the best way to help freshwater species is to restore rivers. This might include fencing out livestock, stabilizing river banks, removing weeds, replanting native vegetation, and expanding floodplain areas.

But this can be expensive. We can make it cheaper to protect freshwater wildlife by including farm and land management—such as rotating pasture, reducing erosion through smart burning practices, and better management of pesticides and nutrients.

While changing farm and land-use practices around rivers can improve water quality “cheaply,” these may have only a modest effect on biodiversity overall—especially if the land next to rivers is degraded.

Freshwater Carries Carbon out of the Forest

We have seen such improvements in a few catchments throughout Australia such as in Queensland. Yet many other catchments nationally continue to deteriorate in water quality and biodiversity.

We therefore cannot just target best-practice farm management programs in the hope that our farmers will do what’s best for the land and biodiversity. We all need to share in the cost of restoring our freshwater ecosystems.

We all stand to benefit from protecting biodiversity and repairing our waterways.

Chrystal Mantyka-Pringle is a postdoctoral research fellow at the University of Saskatchewan in Australia. Jonathan Rhodes is an associate professor at The University of Queensland in Australia. Tara Martin is principal research scientist at Commonwealth Scientific and Industrial Research Organisation (CSIRO), an Australian government agency. This article was originally published on The Conversation.