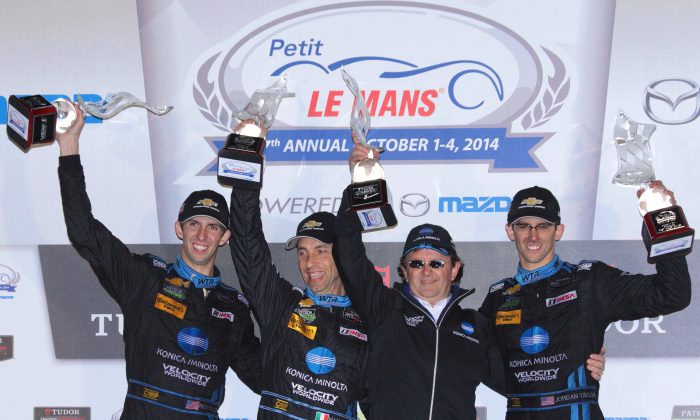 The Taylor brothers and Angelelli completed 400 laps of the 2.54 Road Atlanta racetrack, at an average speed of about 100 mph.—not a record-setting pace, but not bad considering the race was interrupted by a record 13 caution periods.

The WTR team battled the eventual series champions Action Express Racing for the entire ten hours, swapping the lead a dozen times. WTR’s margin of victory was a mere 11 seconds; a dropped tool on a pit stop, the slightest driver error could have reversed the result, but the team performed flawlessly.

Wayne Taylor was part of the winning team at the first Petit Le Mans in 1998, so it is fitting that his team, and his sons, should win the inaugural Tudor championship running of Petit. The win was the hundredth for WTR, and the second of the season.

The win in Prototype Challenge looked to belong to 8Star, but class leader Sean Rayhall got pushed off course only 11 laps from the end of the race, allowing the #8 Starworks Oreca FLM09 of Mirco Schultis, Renger van der Zande, and Alex Popow. Rayhall and co-drivers Eric Lux and Tom Kimber-Smith ended up 20th.

Audi, the only manufacturer in TTD which hadn’t managed a win all season, finally scored when Paul Miller Racing’s #48 R8 LMS driven by Matthew Bell, Christopher Haase, and Bryce Miller came home a scant three seconds ahead of the #58 Porsche 911 America of Snow Racing driven by Madison Snow, Jan Heylen, and Patrick Dempsey.