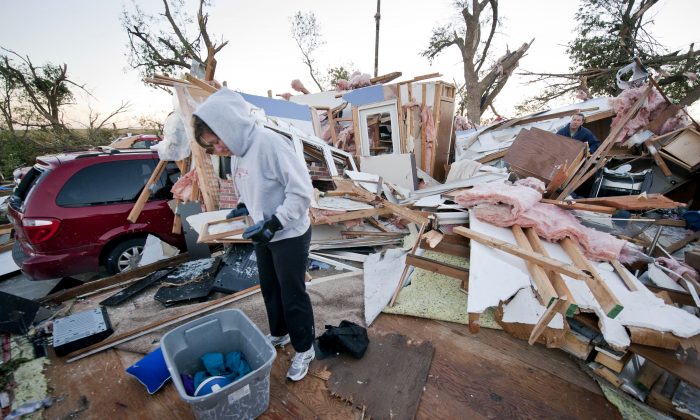 Traci Krus looks at a pictures of her family that she found in her damaged home Saturday Oct. 5 2013 in Wayne, Neb. A tornado struck the northeast Nebraska town Friday, causing millions of dollars in damage, but the mayor says no one was killed and the injuries reported have been minor. Mayor Ken Chamberlain said that officials have accounted for all residents in town. (AP Photo/Dave Weaver)
US

Wayne, Nebraska was the hardest hit town in the Midwest after at least six tornadoes wrought damage on Friday night.

Residents were picking up the pieces of destroyed homes on Saturday and officials began assessing damage.

At least 10 buildings were destroyed and five were heavily damaged, the Omaha World-Herald reported. Video showed a farm implement showroom and a grain elevator had been destroyed. Mayor Ken Chamberlain said at least 15 people were injured, with one person in critical condition.

The storm system that moved through Nebraska on Friday afternoon began producing tornadoes around 4:30 p.m., beginning near Stanton and Madison, then Wayne.

By Friday evening at least six and up to nine tornadoes had ravaged the region, including multiple towns in Iowa, and several in South Dakota.

Corn and soybean fields in and near Wayne were “littered with debris” for miles, said Chamberlain.

The National Weather Service said that the tornado that ripped through Wayne was likely an EF2 or EF3, though the damage survey team saw a couple of spots that suggested it could be as high as an EF4.

See some photos of the destruction below.

[View the story “Tornado Damage in Wayne, NE” on Storify]