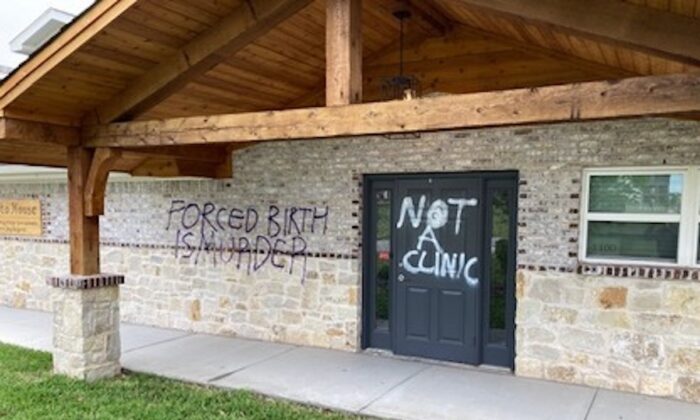 A vandal left pro-abortion slogans on Loreto House, a crisis pregnancy center in Denton, Texas, on May 7, 2022. (Courtesy of Loreto House)
Crime and Incidents

Pro-abortion protesters have attacked pro-life organizations in a number of states by smashing windows, spraying graffiti, and one hurling a Molotov cocktail.

According to pro-life website LiveAction, violent demonstrators have attacked a pregnancy center in Portland, Oregon, and a Catholic church in Boulder, Colorado.

Pro-abortion group Ruth Sent Us also asked activists to “stand at or in a local Catholic church Sunday, May 8.”

A pro-life center in Portland had its windows smashed and graffiti written on its walls, according to pictures from Twitter.

On May 2, a pro-abortion activist listed the addresses of pregnancy crisis centers in Portland online.

According to Randy Bollig, the clinic’s president, pro-abortion people have harassed the clinic all week.

The clinic received obscenity-laden phone calls, suspicious people asking for jobs at the clinic, and one-star Google reviews from people who have never attended the clinic.

“I’m concerned that when Roe gets overturned that they will really get violent,” he said. “We’re a big target because we serve so many women in our area.”

Before the attack, Bollig said he asked for increased police patrols near the clinic.

At about 3 a.m. on May 7, a masked individual spray-painted two of his security cameras and sprayed graffiti on the clinic’s sign, door, and wall.

The graffiti read, “Forced Birth is Murder” and “Not a Clinic.”

“Fortunately we have very good video surveillance,” Bollig said. “I understand that the police have technology that they basically can look through a face mask and get a recognition.”

The clinic also provides resources to mothers until their children turn 3 years old. It gives away 20,000 diapers every month.

Bollig said he was concerned that pro-abortion violence was only beginning.

“And that’s just the way it is. We just have to keep doing what we’re doing. We’re here to help women.”

Like Loreto House, most pregnancy crisis centers are free for expectant mothers.

The violence against pro-life groups follows the leak of a Supreme Court draft opinion that suggested the nation’s highest court will overturn Roe v. Wade, putting the decision on abortion’s legality back into the hands of the states.

“Roe was egregiously wrong from the start,” according to the opinion written by Justice Samuel Alito. “We hold that Roe and Casey must be overruled.”

Since the leak, pro-abortion protests have broken out across the nation. Outside the Supreme Court, protesters have shouted for hours every day since the leak was announced.