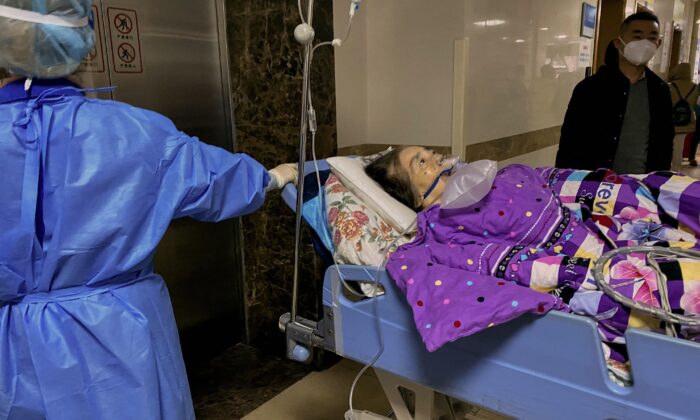 A Covid-19 patient on a stretcher in the emergency ward of the First Affiliated Hospital of Chongqing Medical University in China's southwestern city of Chongqing on Dec. 22, 2022. (Noel Celis/AFP via Getty Images)
By Alex Wu

The growing number of deaths of celebrities and public figures in China has cast further doubt on the official death toll as the country battles an extreme outbreak that shows little sign of easing.

Since late November, more than 330 Chinese celebrities, officials, and scholars have died, according to a tally by The Epoch Times. While the cause of death is not listed in obituaries or official reports, they coincide with the latest COVID surge around the country.

While the Chinese regime continues to vastly underreport the number of fatalities, the high infection rate, and widespread accounts of overwhelmed hospitals and crematoriums points to a death toll far higher than official reports.

The uptick in deaths of prominent figures is another factor indicating the true scale of the virus, according to Wang He, a U.S.-based China affairs commentator. Given that the elite in China typically enjoy access to superior medical treatment, the “large number of their deaths shows that the current COVID-19 epidemic situation in China is very severe and brutal, and it’s very dangerous,” Wang told the Chinese-language edition of The Epoch Times.

Another U.S.-based China affairs commentator Qin Peng described the surge in celebrity deaths as a “slap in the face” to the Chinese Communist Party (CCP), which has always claimed that its pandemic control measures, from the draconian zero-COVID policy to its abrupt reversal of the policy in December, are made for “the sake of the people.”

Given that the health system has collapsed amid the COVID surge, and medical supplies are exceedingly scarce, Qin believes that now only high-level officials are given priority access to health treatment. This means that celebrities and scholars have found themselves locked out, just like the rest of the population.

But even so, many CCP officials have died amid the outbreak. Obituaries show that more than 60 veteran cadres of the CCP’s Ministry of Foreign Affairs have died.

Qin, speaking on his program on NTD, the sister media outlet of The Epoch Times, believes that this wave of COVID outbreak in China has three distinct features: the high speed of transmission, which is unique in the world; the sudden increase in deaths among Party officials and celebrities; and a large number of severe cases and deaths.

These unique traits indicate that the virus specifically targets the CCP, Qin said.

“We observed that many Chinese people now say that because the CCP has done a lot of evil, the virus really seems to have eyes now, and it’s aiming at these people of the CCP,” he said.

Wang concurred, pointing to traditional Chinese beliefs about the reason for epidemics.

“According to Chinese traditional culture, when this kind of great plague occurs, it means that there are large-scale unjust happenings in the world,” Wang said.

He pointed to the Chinese regime’s long list of atrocities against its own people, including its 23-year-long persecution of the spiritual practice Falun Gong.

The practice, composed of meditative exercises and a set of moral teachings rooted in ancient Chinese beliefs centered on the principles of truthfulness, compassion, and tolerance, became hugely popular in the 1990s with an estimated 100 million adherents by the end of the decade. Deeming this a threat, the communist regime launched a sweeping persecution of Falun Gong, resulting in millions of adherents being thrown into detention facilities where they have been subjected to torture, cruel treatment, and forced organ harvesting.

Wang said that during this dehumanizing persecution, the CCP has lied a lot to justify it and to cover it up, a playbook it’s followed during the pandemic.

He urged Chinese people to reexamine how they view the communist regime and break through its lies. This way, they can protect themselves amid the pandemic, he said.

Xia Dunhou and Chang Chun contributed to the report.