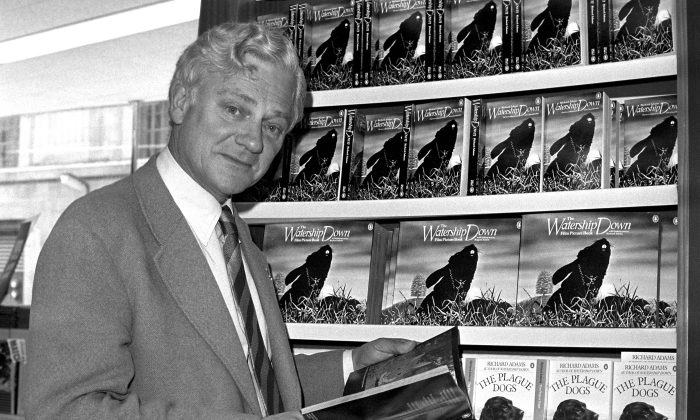 Author Richard Adams poses for a photograph, in this file photo. (PA Photo via AP)
International

LONDON—British author Richard Adams, whose 1972 book “Watership Down” became a classic of children’s literature, has died, according to his daughter. He was 96.

Juliet Johnson told The Associated Press on Tuesday that Adams died in Oxfordshire, England on Christmas Eve after getting progressively weaker in recent weeks.

“He died of what used to be called old age,” she said, adding that her father also suffered from a blood disorder.

Adams’ lyrical and poignant novel about the plight of rabbits whose home was under threat became an astonishing success after it was published. Popular with both children and adults, it has since sold millions of copies and was made into a film, with a remake scheduled for next year.

It entered the popular imagination and has never been forgotten.

Adams dreamed up the elements of “Watership Down” while working as a civil servant and regaling Juliet and her sister Rosamond with stories about rabbits. He would tell them the stories at bedtime and on car trips, often embellishing the tales while driving the girls to school.

Johnson said the characters he described were “a bit more babyish, more simplified” than the ones that turned up in the finished book.

“I think for Dad, that was just the beginnings,” she said of his oral storytelling. “It took him two or three years. He took a lot of trouble writing that book.”

Johnson says there are at least three earlier versions of the book filled with his handwritten changes and notes.

When the manuscript was completed, it was rejected by publishers seven times until its publication in 1972.

“By the time it came out I was a teenager,” she said. “But it had been told to me when I was 8. I’m very proud of it. It’s so beautifully written. If you read ‘Watership Down’ out loud, it’s almost poetry. And I think a lot of stuff in it is very relevant now.”

Adams wrote seven other novels after his first success and often asserted that his 1974 novel “Shardik” was a better book.

“Watership Down” was made into a movie in 1978. Adams went on to write other books, including “Shardik,” “The Plague Dogs,” and “The Girl in the Swing.”

“I was 52 when I discovered I could write,” he told the Guardian newspaper. “I wish I’d known a bit earlier. I never thought of myself as a writer until I became one.”

Johnson said she told him in what turned out to be his final days that he believed his work would endure.

Adams served in the British Army during World War II. Johnson said his experiences in the war often turned up in his books.

“He missed terribly his friends who were killed in the war,” she said. “It got worse as he got older.”

He is survived by his wife Elizabeth, his daughters Juliet and Rosamond, and grandchildren and great-grandchildren.