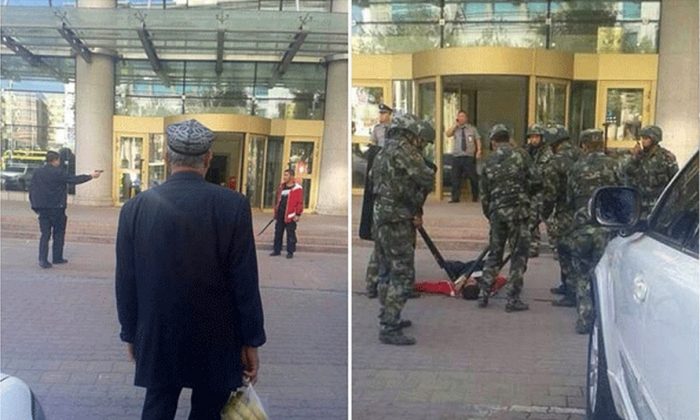 Photos posted online and verified by police show an officer aiming his gun at the armed vendor (left), and the vendor on the ground after being shot (right). (Screenshot/Weixin/Epoch Times)
China

A Uyghur fruit vendor was critically injured after being shot by a policeman in Xinjiang Province on Monday.

The man had a longstanding dispute with a law enforcement official or chengguan who wanted him to move off the sidewalk at the Urumchi bazaar, Radio Free Asia (RFA) reported.

“You always want me to move away from my spot, but give me an alternate site where I can sell my fruit,” the man told the official before the quarrel started, according to an anonymous eyewitness who spoke with RFA.

Police were called to the scene, and an anonymous eyewitness took a photo of an officer pointing his pistol at the man, who was holding his fruit-cutting knife, and another of the prostrate wounded man surrounded by police. The images were later posted on Weixin and widely circulated by netizens, before they were deleted.

Police confirmed that the incident took place, but would not provide details, such as the man’s identity or the reason for the shooting.

A resident told RFA that local authorities had issued a memo saying the vendor was shot because he had “violated the law by obstructing police on duty.”

According to Aboluowang, the chengguan had been given orders to clean up the streets while there were many foreign visitors for Asia Week, which ran from Sept. 2-7, and this may have contributed to the incident.

Almost half of the province’s population are Uyghur muslims. Ethnic and racial tensions in the area have been running high since the 2009 Urumqi riots between Uyghurs and Chinese Han, when nearly 200 people were killed, mostly Han, according to official reports.