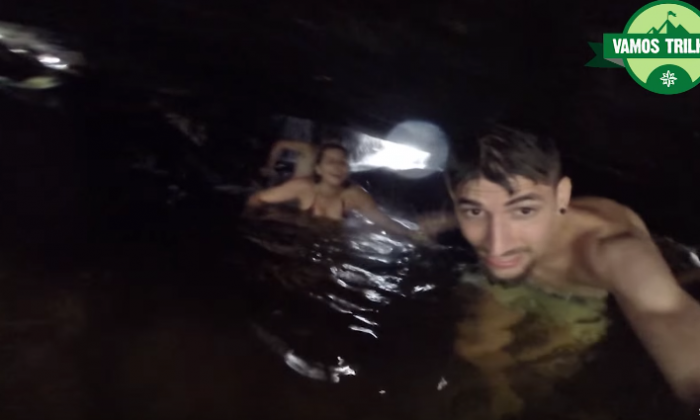 On the outskirts of Rio de Janeiro, Brazil, there’s a beautiful tourist attraction in Trindade village called “Pedra Que Engole,” or “rock that swallows.” This spot can be reached after a short hike, where you then reach a mini cave behind a brilliant waterfall. If one slides in under a nearby rock formation, it leads to a small pool, where the water spits you back out.

In this video, the group makes their way up to the “Pedra Que Engole” and found they can slide right underneath it. Armed with a GoPro camera, the man films his passage through a dark and unnerving path around the side of the waterfall. The top of the man’s head can just be seen before he disappears altogether.

At the start of the video a group are seen swimming around in the surrounding pools. A man in the party then notices that there may be a hidden passageway under the rocks. Disappearing under the waterfall he slides down into the cave on his back. He is joined by friends as they shimmy their way under the rocks as the water pushes them out. From the Portuguese name of the waterfall it is clear that the cave is a well-known attraction. The video was taken last year but the footage has only recently emerged online.