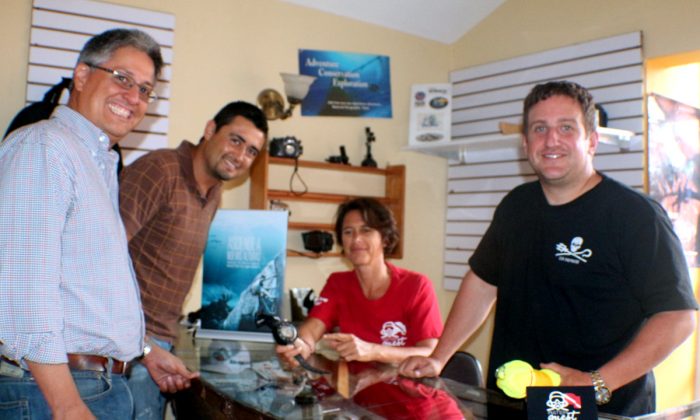 Guatemala is easy to get to. Less than a three hour direct non-stop flight from Miami, a modern airport and water. For the marine enthusiast there is the Pacific coast and the Atlantic side on the Bay of Honduras. There is altitude diving in Lakes Atitlan and Ayarea. There are mountains and jungles to explore and Mayan ruins. Historic sites and old Spanish colonial cities like Antigua where earthquakes left magnificent buildings in ruins.

Miami is a gateway to all of Latin America and the Caribbean. For those making connections, the Sheraton Miami Airport Hotel is a convenient five-minute free shuttle bus ride away. They offer safe valet parking for those that drive to Miami and wish to leave their car. It is always good to arrive rested and sometimes, especially for travelers coming from overseas, a night’s stay at the Sheraton Miami Airport is a good way to break up a long trip.

Antonio ‘Tono’ MacKenney and Bill Schoening began diving as friends. When their scuba shop in Guatemala City closed they made the decision to buy it. They formed Water Quest Guatemala. The facility is modern and includes a swimming pool for dive training, a fully equipped dive shop and repair facility and, most important for visitors, fluent English speakers that are experienced instructors. All levels are offered from beginning divers to technical mixed gas diving.

Tono is the son of Alfredo MacKenney, a medical doctor and famed vulcanologist. A peak of the Pacaya volcano is named in his honor. The father goes up and the son goes down. Both received fame in their respective domains. Tono, born in Guatemala in 1974, studied Electronic Engineering at University Francisco Marroquin. He went to Spain for his Masters degree in electronics and robotics. Tono got into diving in 1996 when a friend urged him to join a course given in Lake Atitlan. He continued his diver education in Spain and became an instructor. He studied technical diving and rebreathers. Tono is an avid cave diver.

Bill Schoening was born in Daly City, California in 1976. He studied criminology at Los Rios University in Sacramento and became a police officer. “I got into diving when I was in the police academy. I dove with my Dad in Lake Atitlan. My Mom is from Guatemala so I came back here to visit. I went diving on the Island of Utilla. I got hooked on diving. I went back to Sacramento and resigned from the police department. When I came back to Guatemala again I went with the scuba shop as an instructor. I met Tono and we were diving all the time,” Bill said.

Water Quest offered Sea Shepherd free use of their spacious offices and school. Captain Steiner remained in Guatemala to conduct educational programs and do presentations to government and non-governmental organizations as well as to upgrade marine skills of Guatemalan officials responsible for inspections at sea.

“Lionfish is an invasive species indigenous to the Indo-Pacific Oceans. They now range from the U.S. to Argentina. They are spreading and eating small fish and crustaceans. A female can lay 200,000 eggs a year. When diving we are conducting lionfish hunts,” Tono said.

Tono has been studying cement reef balls that have been placed in the Pacific Ocean as fish havens. The large, round structures were designed to establish artificial reefs. “Reef balls are my babies. Guatemala began throwing in reef balls in 2006. In some cases, in the Pacific, there is little or no monitoring. I started asking where they are located and tried to find them. Many of them were just dropped singly and some in water as deep at 200-feet. The main idea of an artificial reef is to have a place where creatures can reproduce. Fishermen want to catch fish. When reef balls are placed too deep there is no possibility of coral building since no light penetrates at that depth on the Pacific side. Singly and spread out they serve no real function. I’m trying to help the organizations and see if we can reposition some of them to form reefs,” Tono explained.

Another important environmental issue is the depletion of sharks. “There is a canyon off Puerto Quetzal on the Pacific coast about 15 to 20 miles out. That’s where they catch sharks. As long as fishermen have the whole shark, legally it doesn’t matter what size or what species they take,” Sabine Steiner said.

“If we are able to do reef balls in the right way fishermen do not have to go out there to catch sharks. It is money. If they can make the same money staying on the coast because it costs them less fuel they will do it,” Tono remarked.

“There is no control now or effective monitoring. Anyone can do what they want. That is why we are trying to start Sea Shepherd here in Guatemala. We are taking baby steps,” he added.

“I call this the bat cave,” Bill laughed. He showed off a room where large cabinets held rebreathers and tech dive equipment.

“We improvise. Some of these harnesses we developed for our own diving,” Bill said. “We are training divers on Hollis rebreathers.” The equipment was state of the art. The new facility is modern and the owners commitment to diving instruction and marine conservation extraordinary.

On the Pacific Ocean side Captain Antonio Flores operates launches that take Water Quest divers as well as snorkelers and fishermen to offshore sites. There are mangroves to explore and stretches of black sand beaches. A barrier island at Las Lisas serves as Antonio’s base for Jiote Fishing. A two-story lodge can house divers overnight.

Shipwrecks, about a half-hour from Las Lisas, offer adventurous diving. One wreck, the Springfjord, was bombed by the U.S. CIA in 1954. United Fruit Company was concerned that the democratically elected president of Guatemala would require them to pay taxes on their extensive holdings at fair assessments. United Fruit embarked on disinformation campaigns that eventually led to the CIA sending a mercenary army into Guatemala and bombing the country. The democratically elected president was deposed and a military dictator friendly to U.S. interests imposed.

The Springfjord was an innocent British cargo ship loading cotton and coffee in the Pacific port of San Jose. It was bombed, burned and sank while being towed. The shipwreck is in 120-feet and festooned with nets and fishing gear. Visibility is limited making it a dive for experience wreck divers.

Not far away is a shipwreck locals call El Chino. This vessel was carrying a cargo of illegal Korean immigrants. They were landed in a launch and the captain scuttled his own ship to prevent detection and arrest. The Chino is in about 90 feet of water and visibility is usually better.

Antonio Flores is part of a campaign to protect marine turtles in Guatemala. “People go into the ocean and ride the females up the beach. That way they stake their claim to the turtle’s eggs. They place a basket under the turtle and collect all the eggs. They sell them for a good profit,” Antonio said. While government hatcheries take turtle eggs, hatch them then release the babies, it is rare that the government hatcheries receive the 20% turtle egg portion collectors are required to turn over.

Antonio has been working with governmental and non-governmental organizations to help save marine turtles and create a hatchery on his property on the beach. Stays with the Flores family and diving excursions to the Pacific can be arranged through Water Quest.