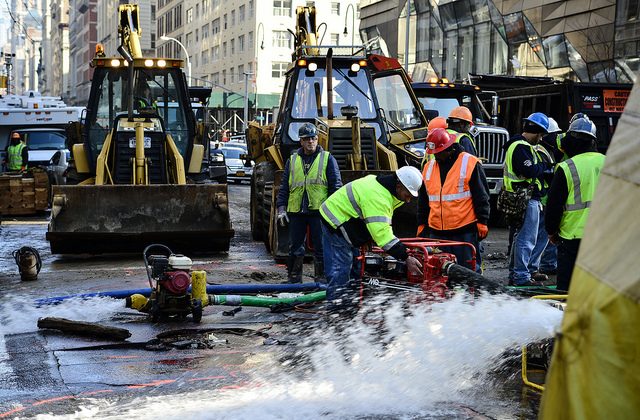 NEW YORK–Tuesday night about midnight, one of the Department of Environmental Protection (DEP)’s water lines broke along 5th Avenue and 13th Street in Manhattan.

The water line that broke was part of NYC’s original Croton water system installed in 1877. NYC currently has three water systems that supply drinking to residents: the Croton, Catskill, and Delaware systems; Croton is the oldest of the three. Currently, it provides about 10% of the City’s daily demand. According to the DEP, “Croton water is primarily used in low-lying areas of the Bronx and Manhattan, where the water can be conveyed by gravity.”

The 36-inch diameter pipe broke, and the water from it washed away the dirt under the asphalt, causing a sinkhole. “The dirt is what supports the pavement,” said a spokesperson from the DEP.

The water to that line is now turned off, and the DEP is making repairs. The DEP said that they cannot speculate how long the repairs will take at this point.

5th Avenue is closed between 13th and 14th Street. The B, C, D, E, F, M, and Q subway lines are affected. Service changes can be viewed on MTA’s website.

The break has caused flooding along the streets and in some parking garages.

A local resident said that he came outside and the water was rushing like a river down the street.

A superintendent of a building in the area said the water in the street came up to his knees when he was there at 2:30 am. He also told Epoch Times that his basement is flooded and his boiler is destroyed.

Parson’s The New School for Design also has its basement flooded. This destroyed almost everything in it, but an employee said their archives are okay.

The superintendent for the building located at 13 W 13th Street, Dino Velaj, said that he saw the water flowing west from 5th Ave towards 6th Ave downhill. His basement, he said, has five feet of water in it. He had lots of flood-ready emergency equipment, which he bought after Hurricane Sandy, in his basement. Unfortunately, all of it is now submerged underwater. He tried to improvise and redirect the flow of the water into the entrance to his building by using loose bricks to build a wall, but it didn’t stop the flooding.