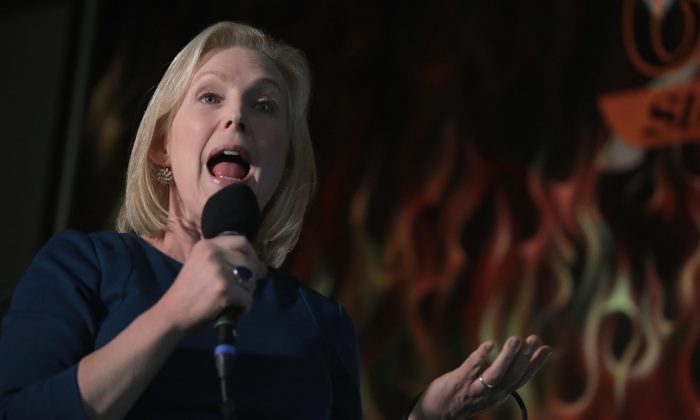 A video reaction shot of Sen. Kirsten Gillibrand (D-N.Y.) responding critically to President Donald Trump’s State of the Union address is at the heart of a complaint filed with the Senate Select Committee on Ethics by the Foundation for Accountability and Civic Trust (FACT).

In the video, Gillibrand is seen sighing and rolling her eyes in response to Trump’s declaration that the United States has “the hottest economy in the world.” Gillibrand posted the video from her personal Twitter account, asking readers if they agree with her and encouraging them to “Chip in $5 so we can put an end to this.”

Senate and House of Representatives ethics rules bar the use of any tax-funded congressional resource in any partisan campaign activity, including fund-raising.

That means the tweet was illegal, according to FACT Executive Director Kendra Arnold, because Gillibrand used a clip from the official House video of Trump’s address to appeal for contributions to her campaign for the 2020 Democratic presidential nomination.

“This is one of the most simple and straightforward ethics rules, and any violation is troubling because the Member has put politics above the law,” Arnold said in a Feb. 11 statement announcing the complaint.

In her group’s letter to the Senate ethics panel, Arnold wrote: “Presumably, Senator Gillibrand is aware of her ethics violation because she later removed the tweet after raising funds in violation of ethics rules, all of which should be returned.

“The ethics rules recognize floor proceedings are official actions and video coverage are official resources, which may not be used for political purposes.

“This is a straightforward violation: Senate Ethics Rules prohibit Senators from solicitating [sic] campaign contributions using official taxpayer-funded resources, regardless of whether it is House or Senate video footage.”

A spokesman for Gillibrand did not respond to multiple requests from The Epoch Times for comment, and it could not be learned whether the senator or members of her staff have had any conversations with the ethics panel, or whether any funds received in response to the tweet have been returned to donors.

The Senate panel rarely comments publicly on the status of its activities with regard to particular complaints against individual senators.

Sen. Johnny Isakson (R-Ga.) is chairman of the ethics committee, while Sen. Chris Coons (D-Del.) is vice chairman. There are four other members, including two from each party.

“Senator Gillibrand knew the rules against using video from Congress for political purposes, and chose to break them,” Manning told The Epoch Times.

“Gillibrand’s political fundraising team grabbed onto what was likely a pre-planned eye-roll, which was suitable for immediately being turned into a political campaign appeal.”

Manning pointed out that nothing was done in response to a previous complaint filed with the ethics committee against Sen. Cory Booker (D-N.J.).

Booker issued fund-raising emails while participating as a member of the Senate Judiciary Committee in the confirmation hearing of Supreme Court Justice Brett Kavanaugh in September 2018.

“If the Senate ethics committee follows up their refusal to sanction” Booker, Manning said, “with another swing and miss on this obvious Gillibrand abuse, it will be clear that they now have two sets of rules—one for Democrats running for president and another for everyone else in the Senate.”

Three months later, Deborah Sue Mayer, the ethics committee’s general counsel and staff director, responded in a letter to Judicial Watch, saying, “The committee carefully evaluated the allegations in the complaint and, based on all the information before it, determined that no further action is appropriate.”

Although the mainstream media has ignored FACT’s complaint to date, Gillibrand is certain to be asked about it in the future.

The New York senator is among a dozen Democratic colleagues in the upper chamber who have announced presidential runs or who are expected to in the near future.