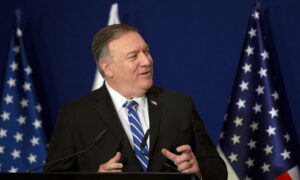 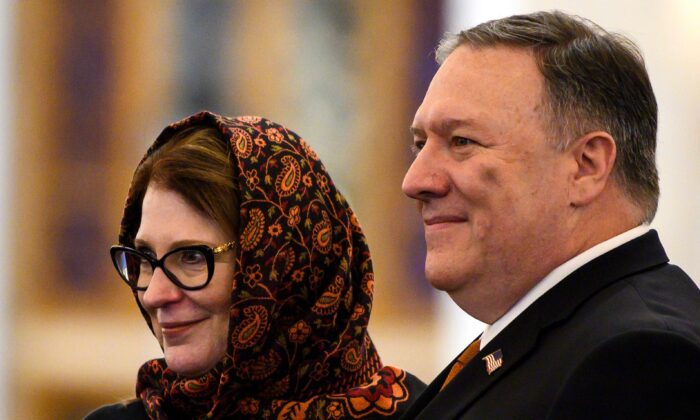 U.S. Secretary of State Mike Pompeo (R) and his wife Susan pose for a photo as they take a tour of the newly-inaugrated Al-Fattah Al-Alim mosque in Egypt's New Administrative Capital, 45 kilometres (28 miles) east of Cairo on Jan. 10, 2019. (Andrew Caballero-Reynolds/AFP via Getty Images)
Politics

The State Department said on Dec. 10 that an independent probe by its watchdog found that Secretary of State Mike Pompeo’s wife did not not violate federal ethics rules by traveling abroad with her husband on official business, as alleged by Democrats and the media.

A report released by State Department’s Office of Inspector General (OIG) to Congress states that Pompeo and his wife, Susan, are “fully vindicated from baseless claims reported as fact by Democrats and Media” after a nearly year-long investigation by the watchdog.

The OIG in its probe interviewed dozens of employees and reviewed thousands of pages of documents, and has cleared the Pompeo, his family, and his entire team of any potential violation of federal regulations or ethics rules, according to a release from the State Department.

The independent probe began under the leadership of inspector general Steve Linick, whom Pompeo fired in the spring after telling President Donald Trump he no longer had confidence in Linick. At the time, Linick had opened several investigations on Pompeo, and his dismissal was roundly criticized by ethics watchdogs and congressional Democrats.

The IG report was released just hours after the State Department took aim at the watchdog, Democratic members of Congress, and media outlets for raising questions about Susan Pompeo’s travel and suggesting it may have been inappropriate. Susan Pompeo had attracted criticism for using government resources while accompanying her husband on diplomatic trips.

After a 2018 trip to the Middle East that took place during a federal government shutdown, a number of Washington officials and embassies abroad questioned whether, under the circumstances, accompanying her husband on the trip was warranted.

Pompeo has said previously that his wife works with the families of diplomats and is a “force multiplier” in boosting morale in the overseas trips.

The report asserts that, as a matter of law, the State Department has the authority to pay for official travel of the spouse of the Secretary of State. It also found that “justification documentation” was provided for each and every trip reviewed.

“The report concluded that ‘the Department had documentation that purportedly demonstrated justification for all eight trips’ undertaken by Mrs. Pompeo in a representational capacity,” the department said.

The department also accused the OIG and Democrats in Congress of “wast[ing] so much energy on multiple fraudulent ‘investigations’ into Secretary Pompeo and his family that have resulted in vindicating all of them.”

“We look forward to seeing the media correct its stories and issue new reporting on the facts. These reporters and Mr. McDermott [Assistant Inspector General for Evaluations and Special Projects], and Democrats in Congress owe the Secretary and Mrs. Pompeo an apology,” it said, referring to media outlets including CNBC and Politico.