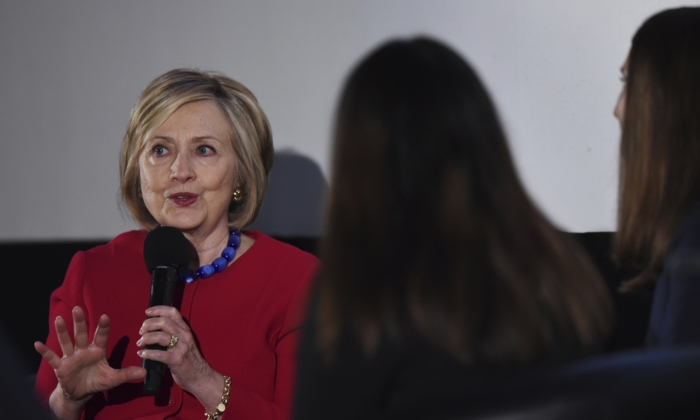 A watchdog group asked a federal judge on Dec. 17 to subpoena Google for records on a Gmail account used to transfer the archive of Hillary Clinton’s emails from her tenure as the secretary of state.

Judicial Watch, a conservative government transparency group, filed the request as part of its yearslong litigation against the Department of State. The group also is seeking an interview with Paul Combetta, the information technology specialist who used the Gmail account to transfer all of Clinton’s government emails to an unauthorized private email server.

Combetta created the Gmail account—carterheavyindustries@gmail.com—in 2012 and used it to test email issues for his clients. The name of the Gmail account, CarterHeavyIndustries, has fueled suspicions that China gained access to all of Clinton’s emails.

Intelligence Community Inspector General investigator Frank Rucker flagged the Gmail account in the metadata of all but four of the emails Clinton’s lawyers handed over to Congress, according to documents released by Sen. Chuck Grassley in August. Rucker became alarmed after searching Google for “Carter Heavy Industries” and coming up with a website for a Chinese company.

The inspectors general for the Intelligence Community and the Justice Department reviewed the matter and did not turn up any evidence to link Combetta with the Chinese company. The inspectors general further determined that the Gmail address ended up in the metadata of virtually every email because Combetta used the Gmail account to transfer Clinton’s emails from a laptop to an email server.

Although the inspectors general appear to have closed the inquiry into carterheavyindustries@gmail.com, their report on the matter raised a number of new questions, including why Combetta used such a peculiar name for the account, whether any of his clients’ systems were still connected to the Gmail account, and why hundreds of Clinton’s emails were still in the Gmail account years after Combetta transferred the Clinton email archive.

“I’m still curious—how did he come up with the name for the email and what has the FBI done to see if there are any connections between China and Combetta?” Rep. Louie Gohmert (R-Texas) told The Epoch Times in August.

“It may tell us, as we suspected, that they probably already knew about it and when they found out the Intel IG knew about it, then they had to at least ask a question about it to try to cover their rears.”

In October, the State Department announced that its review of the Clinton emails cited 38 people for mishandling classified information.

After discovering the Carter Heavy Industries anomaly in Clinton’s emails, Rucker alerted the FBI. Days later, on Feb. 18, 2016, Rucker met with Peter Strzok, the FBI official who has since gained notoriety for his biased text messages expressing preference for then-presidential candidate Hillary Clinton and animosity toward then-candidate Donald Trump. Rucker and Jeanette McMillian, an ICIG attorney who also attended the meeting, both told investigators that Strzok looked aloof and dismissive as they relayed their concerns.

On the same day, more than 1,600 miles away in Denver, FBI agents interviewed Combetta. Combetta told the agents that he used the Gmail account to transfer Clinton’s email to an email server in Secaucus, New Jersey, in February 2014. Purportedly, “carterheavyindustries@gmail.com” ended up in the metadata of each message a result.

At least eight of the email chains contained in the batch Combetta siphoned through the Gmail account were classified as top secret—the highest level of classification for government documents in the United States—at the time they were sent. In the hands of an adversary, top-secret information could cause “exceptionally grave damage” to the national security of the United States. At least 36 email chains contained secret information, of which disclosure to an unauthorized actor could cause “serious damage” to national security.

Then-Intelligence Community Inspector General Charles McCullough told Congress that some of the Clinton emails were classified at a level beyond top secret, meaning it was information so closely held that it couldn’t be viewed, even in a secure, compartmentalized facility, by members of Congress.

As a result, some of the emails Combetta siphoned through the Gmail account contained information classified at the highest level of secrecy.

Combetta told FBI investigators in his Feb. 28, 2016, interview that he used the same Gmail account to test email issues for his other clients, meaning that other email servers may have been connected to “carterheavyindustries@gmail.com.” It’s unclear if the FBI or the inspectors general ever obtained the access logs for the Gmail account. These records will show whether anyone other than Combetta had access to the server.

Despite learning that Combetta transferred Clinton’s entire email archive through “carterheavyindustries@gmail.com,” the FBI waited a month to apply for a search warrant for Combetta’s account. A magistrate judge in Virginia granted the warrant on June 20, 2016, roughly two weeks before then-FBI Director James Comey usurped the authority of the attorney general and exonerated Clinton in an unprecedented public statement.

After the FBI executed the warrant, analysts discovered 820 of Clinton’s emails—some of which were classified—still sitting in the Gmail account more than four months after the Intelligence Community inspector general investigators handed the lead over to the bureau.

The Judicial Watch request for an interview with Combetta and for a subpoena to Google may finally shed light on a number of crucial questions, including the following.