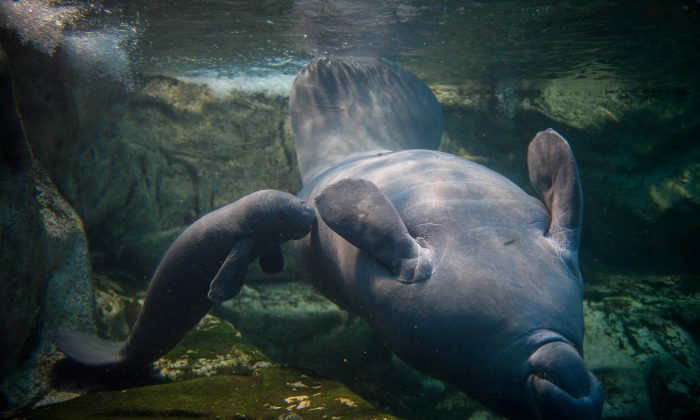 A baby manatee swims near his mother in the manatee tank of the Zoological park of Beauval in France on March 15. (GUILLAUME SOUVANT/AFP/Getty Images)
Trending

Watch: Young Woman Flips out When Encountering a Manatee

A woman’s reaction to something seemingly innocuous has gone viral.

While swimming in waters near Florida, the young woman appears to realize the marine animal is a manatee.

However, she still loses it and attempts to swim away.

“Where is it,” she screams to friends on the boat as the sea cow approaches. “Get me out of here.”

At one point, the girl calms down and tries to touch the manatee, but she then thinks twice and backs off.

Manatees are generally considered harmless and gentle. However, due to Florida state law, it’s illegal to “harass, hunt, capture or kill any marine mammal.” What’s more, the law stipulates that “unlawful for any person, at any time, intentionally or negligently, to annoy, molest, harass or disturb any manatee,” Patch.com reported.

What If You Saw This on Your Vacation? Up Close and Personal with a Manatee

It’s not clear where the girl is grom or where in Florida the encounter took place.

Researchers say that manatees can get between 8 and 13 feet in length and can weigh between 440 and 1,300 pounds.

And despite the “sea cow” nickname, they’re “more closely related to elephants. Though they may seem like cumbersome creatures, manatees can swim quickly and gracefully,” says LiveScience.

“Manatees are herbivores. At sea, they tend to prefer sea grasses. When they live in rivers, they consume freshwater vegetation. Manatees also eat algae. According to National Geographic, a manatee can eat a tenth of its own weight in 24 hours. That can equal up to 130 lbs. (59 kg),” the site says.

The latest official count of manatees shows there are more than 6,200 of the marine mammals in Florida—a record. The Fish and Wildlife Conservation Commission said Thursday that almost 3,300 were counted on Florida’s east coast, and almost 3,000 manatees were counted on the state’s west coast, AP reported.

The counts this year and last year are the only two times on record when Florida’s manatee population exceeded 6,000.

The annual count represents the minimal number of manatees in the state since many marine mammals go undetected.

“Today, we both recognize the significant progress we have made in conserving manatee populations while reaffirming our commitment to continuing this species’ recovery and success throughout its range,” Jim Kurth, an official with the FWS, said in a statement via the FWS.