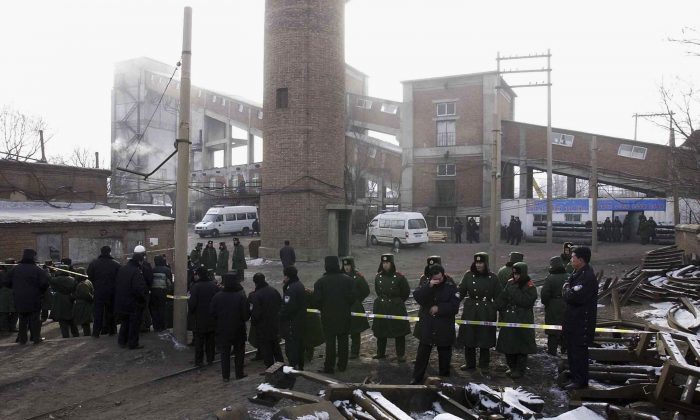 When Lu Hao, governor of China’s Heilongjiang Province, boasted at a high-profile meeting in Beijing that all miners’ wages in his province had been accounted for, thousands of miners whose wages had not in fact been settled took offense.

Lu had stated on March 6 that miners’ wages had been covered to the cent; however, according to the workers who came out on the streets in force in the next four days, wages have been delayed for up to half a year. Miners working with a state-run coal mining industrial group in the prefecture-level city of Shuangyashan number about 60,000 and make roughly 800 yuan (about $125) a month.

Protesting workers and their family members held up signs emblazoned with slogans like  “Communist Party, give us back the money we earned with our blood and sweat” and “We want to live, we want to eat.”

As shown in footage taken at the scene, the demonstrators march to the local office of the mining affairs bureau, where staff and police attempt to placate the workers. The workers can be heard angrily demanding their wages and an explanation for the delays. When the bureau gave no explanation, the protesters moved to other parts of town, including rail and traffic hubs.

On March 11, the protesters dispersed after the authorities deployed thousands of military police to the area. Four workers were arrested, according to New Tang Dynasty Television.

Heilongjiang Province is located in Northeast China, a resource-rich region of about 100 million people that is known as an industrial rustbelt. State-run enterprises that supply raw minerals to fuel growth in other parts of China are notorious for contributing to the corruption and stagnation in the Northeast.  In recent years, economic slowdown has led to mass layoffs and pay cuts, fostering dissatisfaction and unrest.