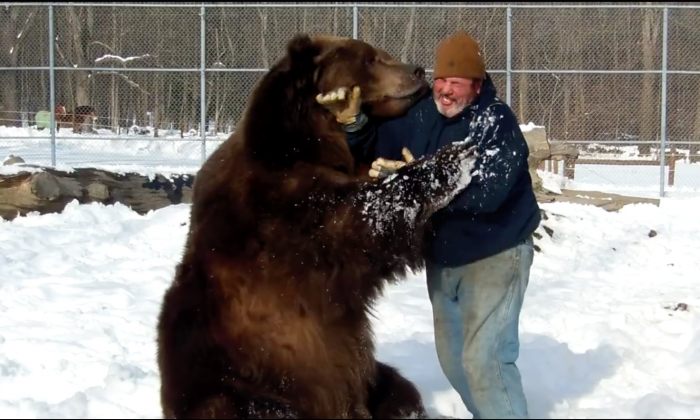 Millions of people around the world have hugged a teddy bear, but only a lucky few have managed to hug a real bear and live to tell the tale.

Jim Kowalczik is one of them.

A retired corrections officer, Kowalczik helps take care of injured animals at a rehabilitation center in Otisville, N.Y. The property became an official non-profit, the Orphaned Wildlife Center, in 2015, and hosts a number of creatures, ranging from raccoons and deer to 11 bears of varying species.

Some of the bears have been raised at the facility since they were cubs, and have grown close with their caretakers, prone to giving them friendly “bear hugs.” Below is a video of Kowalczik hugging Jimbo, a 9-foot tall, 1,500 pound Kodiak bear.

Someone asked for video of Jim and Jimbo playing. I found this on my phone! 🙂

However, once domesticated, as it were, the bears raised at the center often can’t return to the wild. Kowalczik and his wife, Susan, spend a majority of their days taking care of the bears at the center.

“These bears also show affection and love back to Jim and Susan, and every night there is snuggle time with the bears that want it,” a caption for a photo of the bears snuggling with Kowalczik reads.

Not all of the bears are safe to interact with up close, but even some of the bears adopted at an older age have learned to be friendly with humans.

“Most of our bears are very friendly, some we wouldn’t entirely trust,” Kerry Clair, who helps run the Orphaned Wildlife Center, said in an email. “Frankie was a black bear taken in a few years ago that was older than normal. But he is very friendly too.”

If your back is sore maybe you have to postpone playing with your big, huge bear. 🙂

The bears can be expensive to keep. During the months before hibernation they can often eat up to 30 pounds of food a day. To help, you can donate to the center here, or buy something off their Amazon wish list.