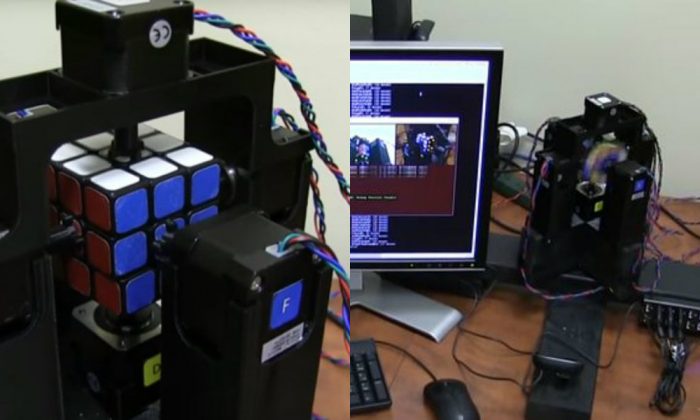 A viral video shows a robot solving a Rubik’s Cube puzzle in barely over one second.

UPDATE: The duo set a new world record on Feb. 5, solving the cube in 0.900 seconds, which can be seen here:

They wrote: “On February 5th, 2016, Paul and I demonstrated our robot in front of a crowd of around 100 people including an official Guinness judge, who certified our record time at 0.900 seconds.”

The device is described as the “world’s fastest Rubik’s Cube solving robot.” The robot actually solves the Cube starting at around the 3:20 mark in the video (but there’s a GIF of it below):

Software engineers Jay Flatland and Paul Rose built the device, and they’re currently in the process of applying for the world record. Venture Beat notes the current record for a machine solving a Rubik’s Cube stands at 3.253 seconds.

Video: Car Drives Off the Side of a Mountain Near Los Angeles on Angeles Crest Highway

Specifically, it took about 1.04 seconds for the robot to complete the task.

The current human world record is held by Lucas Etter at 4.904 seconds, and it can be watched here (which is frankly more impressive):