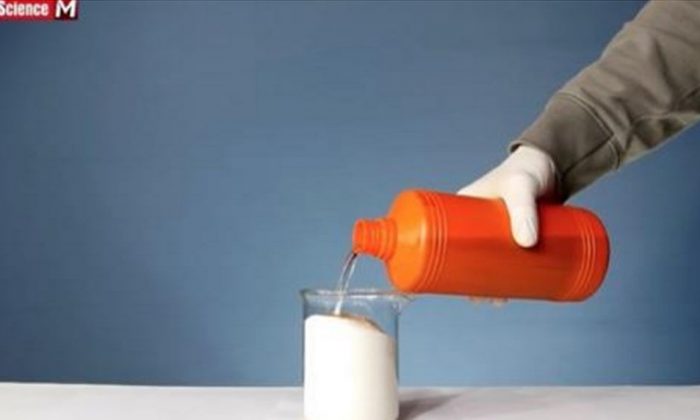 A YouTube channel uploaded a video showing what happens when one pours sulfuric acid on common household sugar.

The uploader first places the sugar in a glass before pouring the acid inside of it. The acid and sugar form a goo as the sugar is dehydrated to produce carbon, vapor, and sulfur dioxide gas. The blackish goo then rises out of the glass. The University of Wisconsin’s Division of Chemical Education says that it’s an “exothermic reaction” that takes place “during which a column of carbon rises from the beaker with a cloud of steam and sulfur dioxide.”

“The name carbohydrate derives from the formula of sugars such as sucrose (C12H22O11 or C12(H2O)11) in which the formula appears to be a hydrate of carbon. In the presence of concentrated sulfuric acid sucrose is dehydrated to produce carbon and water. The heat of the reaction vaporizes the water causing the column of carbon to form,” the site says.

Later, the uploader then places acid on sugar cubes and a similar reaction takes place.

Due to the gas that’s produced and danger of handling sulfuric acid, this isn’t something you should try at home.

But if you are going to try it, you’ll need the proper equipment.

“If you do this demonstration, use proper safety precautions. Whenever you deal with concentrated sulfuric acid, you should wear gloves, eye protection, and a lab coat. After the beaker has cooled, you can pull out the carbon and remove the residue from the glassware with acetone. It’s preferable to perform the demonstration inside of a fume hood,” says About.com.

The ChemEd DL site says: “The column of carbon expands to fill and then overrun the beaker in which the reaction takes place. This reaction is very exothermic and produces poisonous gas (sulfur dioxide). Therefore it was performed in a fume hood.”