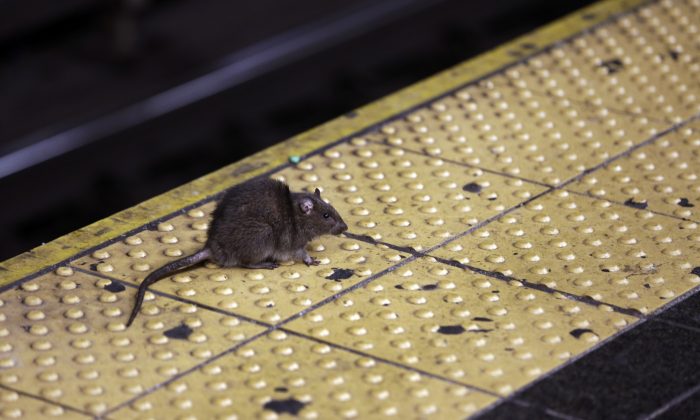 FILE - In this Jan. 27, 2015, file photo, a rat crosses a Times Square subway platform in New York. It’s a problem practically as old as New York itself, how to handle the untold legions of rodents residing in the city. Last year, the city received more rat-sighting calls than ever before, and officials, led by a city rat scientist, are trying new and innovative ways to control the population, with mixed results. (AP Photo/Richard Drew, File)
Science News

Watch: Rats Can Easily Get Into Your Toilet, And It’s Your Worst Nightmare

Disgusting as they may be, rats are quite determined. They’re so determined that they can easily swim up into your toilet bowl from the sewer system, as this video from National Geographic shows.

The aforementioned video from National Geographic reveals how quickly a rat can get through a plumbing system. The video shows that rats have a great deal of endurance and flexibility to get where they need to go.

They can swim for three days and can hold their breath for 3 minutes at a time, the video says.

Rats also can get through tiny gaps–A rat’s ribs are hinged at the spine, meaning they can get through spaces as small as a quarter in size. All the rat needs to do is get its head through.

“First it can easily sneak into grates or manhole covers open to the street,” says narrator of the NatGeo video. “Residential sewer pipes feed into the main tunnel and a rat might consider this path an irresistible opportunity for exploration.”

According to an account published in Gothamist, an exterminator in Brooklyn said this actually does happen:

“I’ve dealt with it many times. The pipe is empty, the rat crawls through the pipe and up over the hump and into the porcelain. And he can’t get back out. What I do? I flush it down! It happens all the time, especially if you live in the basement or a first floor apartment. As soon as they go up over that hump they’re in the bowl. So they call me, I go in and just flush the toilet. 100 bucks!” he says.

“But if it’s managed to get out of the bowl, then you earn your money. If they leave the lid up, the rat can get out. Or, about a month ago, one of my employees got a call from a guy with a rat in his bathroom. This guy had the lid down, but he had one of those fabric covers over the toilet lid that wraps underneath the lid a little bit. So the rat was able to cling onto that and pry the lid open! My guy went in and beat it to death with a snow shovel.”

So, the next time you head to sleep, make sure to shut your toilet lid.