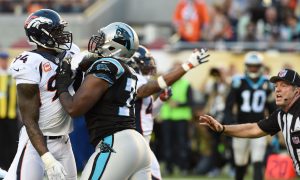 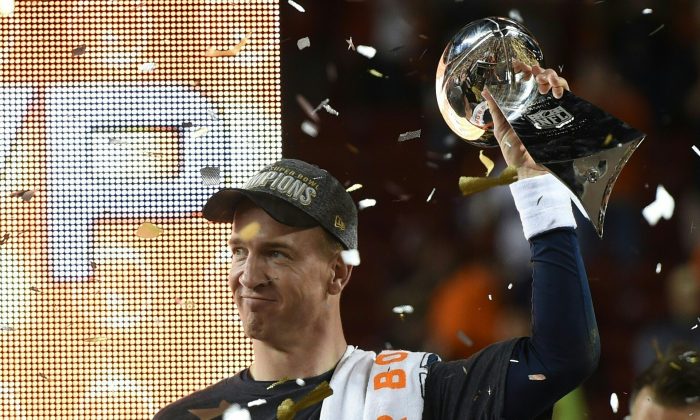 Peyton Manning has yet to announce whether he'll be back for another season after helping lead the Broncos to a win in Super Bowl 50. (Timothy A. Clary/AFP/Getty Images)
NBA

Now that Peyton Manning has done the usual trip to Disneyland to celebrate his Super Bowl victory, it’s onto “The Tonight Show” with Jimmy Fallon to play egg Russian roulette with Magic Johnson.

That’s right. Jimmy Fallon had two of the best ever players at their respective sports guessing which eggs were hard-boiled and which weren’t by smashing them over their heads to find out. Watch the silly clip here:

That wasn’t the only extent of their interaction though.

Johnson, the former L.A. Lakers star and current L.A. Dodgers part-owner is also one of the first season-ticket holders of the L.A. Rams, which just moved to the west coast from St. Louis in January. Apparently, he’s now lobbying on the Rams behalf (unofficially) and he’d like the future Hall-of-Famer Manning to forego retirement to come play in L.A. in 2016, as shown here.

The non-committal Manning was almost embarrassed by the attention.

How Manning would do as a 40-year-old next season coming off his worst year as a pro on a team that’s not exactly rife with talent is debatable (at best) though. The five-time NFL MVP still knows better than anyone when to audible a play, but recent injuries have sapped his ability to put the ball where it needs to go.

Manning threw for 2,249 yards last season in 10 games but threw just 9 TDs as compared to 17 interceptions, resulting in a career-worst 67.9 quarterback rating. His shortcomings were somewhat hidden by a defense that allowed the fewest yards in the NFL.

Should he want to play another season, hopefully he’ll have better luck than some other sports legends, who played a little too long.

Emmitt Smith—the NFL’s all-time leading rusher—finished his Hall-of-Fame career with two forgettable seasons in Arizona. The former Dallas Cowboys star averaged just 3.3 yards per carry with the Cardinals—a far cry from his days in Dallas where he ran for over 1,000 yards 11 times in 13 seasons.

Reggie White was an eight-time All-Pro and 13-time Pro Bowl selection over 14 seasons with the Philadelphia Eagles and Green Bay Packers from 1985–98. But after a one-year retirement he came back in 2000 with the Carolina Panthers for a forgettable season, registering a career-low 5.5 sacks before retiring for good.

Even Jerry Rice had trouble hanging up the cleats. The unquestioned best receiver in NFL history hung on until he was 42 years old, splitting his final season (2004) between the Oakland Raiders and Seattle Seahawks and registering career-lows of 30 catches and 429 receiving yards.