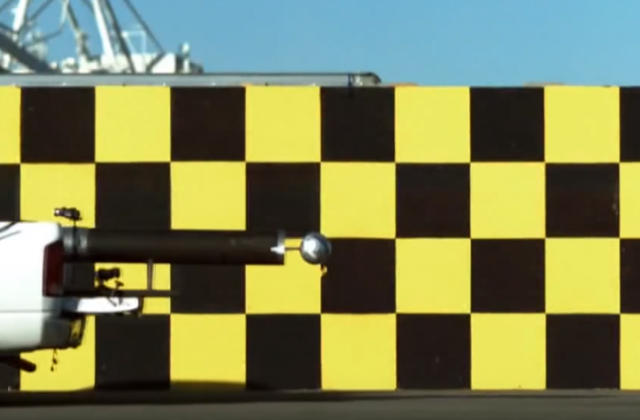 WATCH: ‘Mythbusters’ Fires a Ball at Sixty MPH out of a Truck Traveling Sixty MPH in the Opposite Direction

In am experiment, the team from “Mythbusters” showed what happens when one fires a ball–a soccer ball to be specific–out of a cannon at a truck heading 60 mph in the opposite direction.

The demonstration shows the ball moving “straight down” as it’s going at the same velocity as the truck going the opposite direction.

However, some bloggers have noted there’s issues with the “Mythbusters” experiment.

“So, what is the problem? The problem is with the MythBusters’ use of their terms to explain this thing. Let me look at a couple of the things they said to explain this (surprisingly, they described it several different ways). This first one is my favorite,” wrote Rhett Allain with Dot Physics.

He gives three instances of “bad physics” being used in the video. “Does the forward momentum and the backward momentum cancel out?” one of the hosts says.

“I think the main error here is that they are using the term “momentum” to either mean velocity or force – not sure which. Also, if they are talking about momentum, the momentum of what? The truck and the ball?” Allain explains.

He critiqued another part of the videos, where the host says, “…see if the energies cancel out.”

He then said: “Can you get energies to cancel? Well, you could get the potential plus kinetic to be zero joules, but would that count as canceling? You can never get two kinetic energies to add up to zero because 1) it isn’t a vector and 2) it is always positive.”