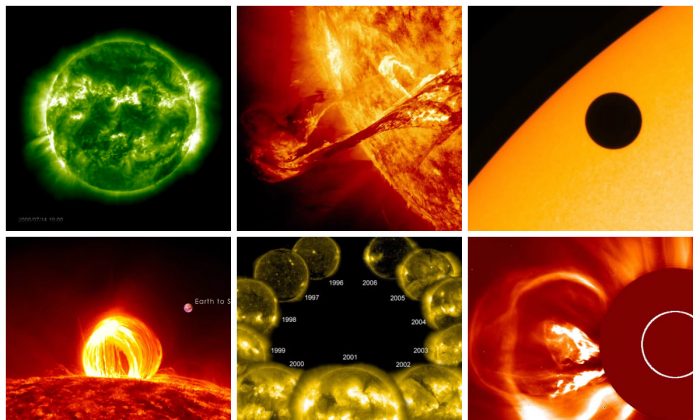 For over 20 years, NASA and ESA (European Space Agency) have operated the Solar and Heliospheric Observatory, or SOHO—a satellite dedicated to observing the Sun. SOHO has captured, and continues to capture, breathtaking images of our closest star in 10 wavelengths of both visible and invisible spectrum. NASA then combines these images into incredible time lapse videos.

Here we give you the most mesmerizing ones. All the videos are in HD resolution, so full-screen watching is recommended.

Let’s start with this short video of a giant Sun eruption of August 31, 2012.

“[A] long filament of solar material that had been hovering in the sun’s atmosphere, the corona, erupted out into space at 4:36 p.m. EDT. The coronal mass ejection, or CME, traveled away from the sun at over 900 miles per second,” NASA’s Goddard Space Flight Center comments. “This movie shows the ejection from a variety of viewpoints as captured by NASA’s Solar Dynamics Observatory (SDO), NASA’s Solar Terrestrial Relations Observatory (STEREO), and the joint ESA/NASA Solar Heliospheric Observatory (SOHO).

If the first video was grand in scale, the second one is abundant in beauty. As mentioned above, apart from SOHO, NASA also flies the Solar Dynamics Observatory, a spacecraft launched in 2010 to observe the Sun. Here we have one of the best catches of SDO that NASA has released.

“Eruptive events on the sun can be wildly different. Some come just with a solar flare, some with an additional ejection of solar material called a coronal mass ejection (CME), and some with complex moving structures in association with changes in magnetic field lines that loop up into the sun’s atmosphere, the corona,” NASA’s Goddard Space Flight Center explains. “On July 19, 2012, an eruption occurred on the sun that produced all three. A moderately powerful solar flare exploded on the sun’s lower right hand limb, sending out light and radiation. Next came a CME, which shot off to the right out into space. And then, the sun treated viewers to one of its dazzling magnetic displays—a phenomenon known as coronal rain.”

But wait, there’s more! Just several days ago NASA released a video of the Sun’s magnetic activity. Since magnetic forces are invisible to us, NASA had to rely on a computer model to create the video. It is a captivating peek into the immense amount of activity that goes on in space while completely invisible to the human eye.

Impressed yet? Well, here’s Dr. Joe Gurman of NASA’s Goddard Space Flight Center offering commentary on some of the SOHO’s impressive shots. Wait for the images of comets passing the sun.

And here’s something for real connoisseurs: A 30-minute clip of the Sun at different wavelengths from the SDO satellite in Ultra HD resolution. If you don’t have a 4K display, you won’t even be able to see the full quality of this video.

And lastly, just to give ourselves a bit of perspective, here’s a video of Venus passing the Sun. Since Venus is almost as big as Earth, it gives us a nice view of how giant the Sun actually is.