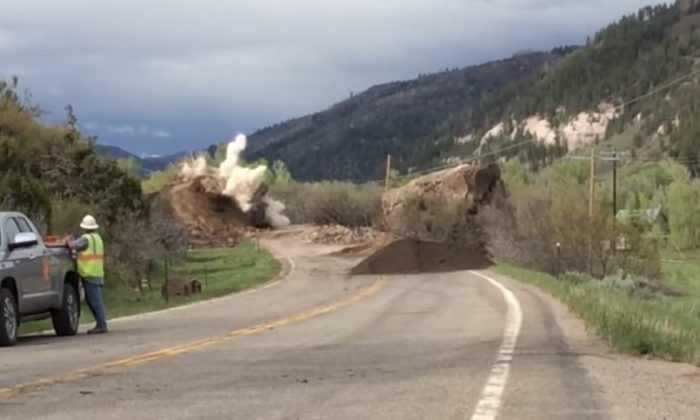 A large boulder was blasted apart on Colorado Highway 145 on May 26, 2019, officials said. (Colorado Department of Transportation)
US News

A massive boulder that plowed its way down and destroyed a Colorado highway on May 24, making it impassable, was blasted apart as construction crews worked tirelessly to reopen the highway.

The 2.5-million-pound rock tumbled from a ridge about 1,000 feet above before landing onto the two-lane Colorado Highway 145, between Cortez and Telluride, according to the Colorado Department of Transportation (CDOT).

The boulder that was blasted on May 26 was part of a “significant rock fall,” where two boulders, dirt, and smaller rocks fell, creating a trench on the highway about eight feet deep across both lanes, officials at the City of Ouray said. As a result, the highway was closed indefinitely.

They added that after the blast of the smaller boulder, trucks began moving the fragments away so that traffic could pass through a temporary road built by the department’s maintenance division. The state department agency anticipates the task to be completed on May 27.

Along with cleaning up the debris that fell onto the highway, a team of a geotechnical crew was also flown up to the ridgeline to clean and clear unstable and loose rocks to prevent further unpredictable rockfall, officials said. The drilling and blasting of one of the boulders began after this process, calling rock scaling, had completed.

Although it is common for rocks and boulders to fall onto mountain highways, the recent rock slide is considered unusual because it started about 1,000 feet above the highway, reported Fox 31.

Colorado state officials (pdf) said that “rockfall is the fastest type of landslide and is common in mountainous areas near cliffs of broken, faulted, or jointed bedrock, on steep slopes of rocky soils, or where cliffy bedrock ledges are undercut by erosion or human activity.”

They add, “The loss of support from underneath, or detachment from a larger rock mass destabilizes the rocks and gravity does the rest. The criteria for rockfall is simply an exposure of broken rock, gravity, and a slope steep enough that when a rock detaches or dislodges from the ground surface, it will move down the slope rapidly. Complex interactions between physical parameters of both the rock and the slope cause the falling rocks to move down the slope in a high-velocity, seemingly random and erratic manner.”