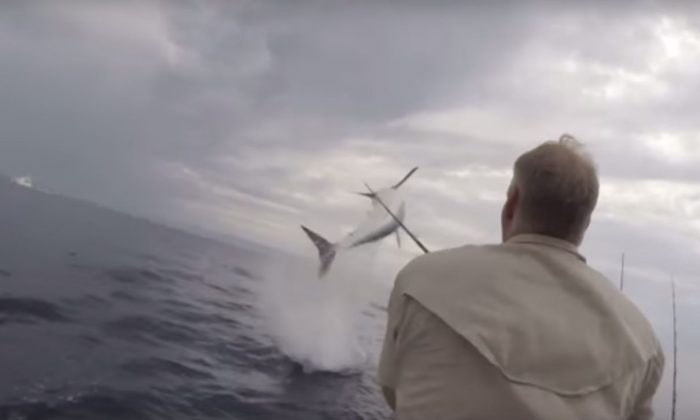 If you thought you could keep yourself safe from sharks by staying out of the water, think again.

A fisherman was given the scare of his life after a Mako shark repeatedly jumped out of the water off the coast of California. He’s can be heard screaming as the shark gets close to his boat. The man screams for the small boat to get out of the area as fast as possible.

In one instance, according to the Telegraph, the shark jumps 12 feet into the air. The fishermen are able to move their boat out of the path of the shark.

The shortfin Mako shark is the fastest of all species of shark. The top speed has been recorded at 25 mph with bursts of up to 46 mph.

The Mako is “the cheetah of the ocean,” Amy Lang, an aerospace engineer at the University of Alabama who specializes in experimental fluid dynamics, told LiveScience. “It has evolved to chase down tuna.”

The shark’s scales act similarly to the dimples on a golf ball control flow separation, allowing it to travel farther in the air.

“Unlike a golf ball, which has no preferred separation of flow, a shark is always swimming in one direction,” Lang added.