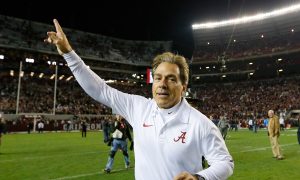 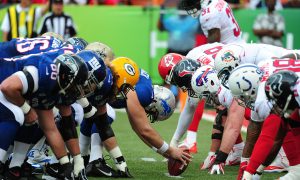 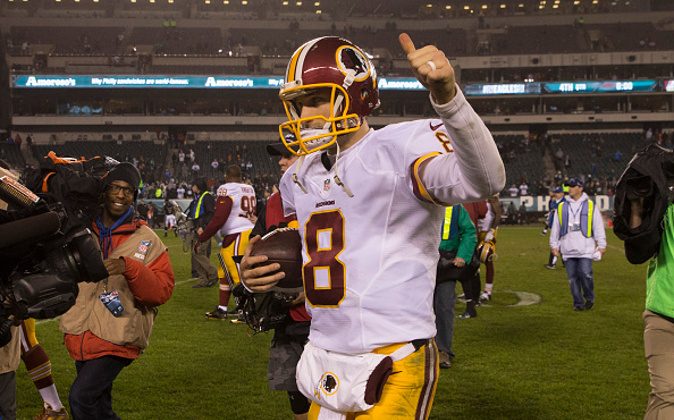 PHILADELPHIA, PA - DECEMBER 26: Kirk Cousins #8 of the Washington Redskins celebrates at the end of the game against the Philadelphia Eagles on December 26, 2015 at Lincoln Financial Field in Philadelphia, Pennsylvania. The Redskins defeated the Eagles 38-24. (Photo by Mitchell Leff/Getty Images) *** Local Caption *** Kirk Cousins
NFL

The score is 16-10 Redskins, and the Redskins have the ball at their own 29 yard line with 29 seconds left in the half.

Now check out the following play by play:

With 0:29 on the clock and first and 10 on the Redskins 29, Kirk Cousins passes deep left to Desean Jackson, pushed out of bounds for 22 yards.

With 0:23 on the clock, Kirk Cousins passes deep left to Pierre Garcon to the PHI 24 for 25 yards.

With 0:17 on the clock, Kirk Cousins passes short middle to Jordan Reed to the PHI 13 for 11 yards.

A defensive delay of game then moves the Redskins to the PHI 6 with just 0:06 left.

Seems incredibly surgical doesn’t it? The Redskins have ample time on the clock to make one attempt at the red zone. At the very least, they have a field goal.

Now check out the final play of the half.

Time runs out from the clock. No touchdown. No field goal. The Eagles are already heading into the locker room while Redskins are still trying to figure out what happened.

Catch out the confusion of this bizarre play in all its glory below.

Really, what happened? If the Redskins didn’t want to make a play at the endzone and just wanted to stop the clock, the correct play would have been a spike, which stops the clock. At halftime, Redskins coach Jay Gruden was asked what happened, but he replied that he didn’t know.

It was just your old-fashioned “brain-fart”. It could have been a huge mistake, but luckily for Cousins, the Redskins probably could have spotted the Eagles three touchdowns and still won last night.

Meanwhile, the legend of Kirk “You Like That” Cousins continues. After throwing 31-46 for 365 yards and 4 touchdowns lat night, Cousins is now at a 69.5 completion percentage on the year for 3,990 yards, 26 touchdowns, 11 interceptions, and a 99.2 passer rating. Maybe no one guessed it, but having played at an elite level all year, Cousins is a contract-year quarterback that is going to get paid well this offseason.

Redskins are in the Playoffs

With the win over the Eagles, the Redskins have officially won the NFC East, securing them a spot in the NFL playoffs.

As division champions, the Redskins will host a playoff game Jan. 9 or Jan. 10 at FedEx Field. Their likely opponents are the Seattle Seahawks, Green Bay Packers, or Minnesota Vikings, with each team fielding a current record better than the Redskins.

Though some may consider this a testament to how atrocious the NFC East has been this year, the Redskins (8-7) have shown that they are by no means a dysfunctional team that just happened to be the cream of a rotten crop.

After a season filled with drama last year, Redskins’ second-year coach Jay Gruden has made sure that the focus was entirely on football this season. Aside from Cousins playing well, the Redskins have standout performers on both sides of the ball, including all-pro tackle Trent Williams, and players like Desean Jackson, Pierre Garcon, and tight end Jeff Reed in a very good receiving corps. On defense too, players like Ryan Kerrigan, Trent Murphy, and cornerback Brashaun Breeland stand out.