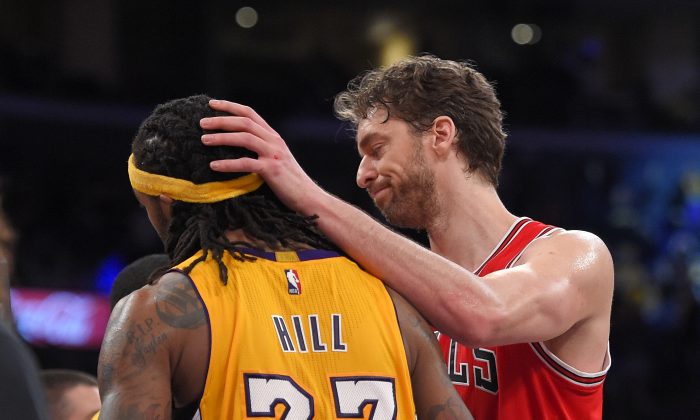 The Lakers, without Kobe Bryant, who recently suffered a season-ending injury, and Nick Young, who has a sprained right ankle, got past the Bulls thanks to Hill’s stellar night, which included a neat 11-22 from the field and a jumper to help seal the game with less than two minutes left. Hill, who pulled down 12 rebounds, also scored the basket that sent the game to another overtime.

The Lakers as a whole outshot the Bulls with 47.2 percent shooting, and 33 percent from three-point range. The Bulls shot just 41.3 percent, and 24 percent from behind the arc.

The Lakers appeared to have the game in the bag but the Bulls mounted a furious comeback, forcing several turnovers and scoring easy buckets in the final minutes of regulation. Pau Gasol’s tip-in with less than a minute left tied the game, and Hill’s short hook shot rimmed out. The Bulls started strong in overtime but the Lakers came back, capped off by Hill’s jumper with just seconds left. In double overtime Hill helped Los Angeles finish off Chicago, which has struggled lately.

Hill’s career high is 28 points, which he notched twice in March 2014.