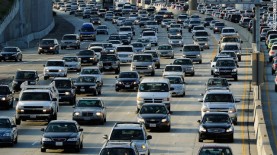 Anger and road rage go hand-in-hand. Understanding anger as a symptom that something else is wrong will assist in eliminating that road rage, keeping you safer.
News

Watch it, You Jerk!: Overcoming the Deep-Seated Anger of Road Rage

If you met me, you’d conclude that I’m an outwardly happy person. You’d say that Anger and Deborah just don’t seem to belong in the same sentence, and I would agree. That’s likely the reason I was so surprised at myself this past weekend when I unleashed some fierce road rage. When discussing it with a new acquaintance, it was pointed out that I may want to address my ‘anger issues’. I was taken aback. I’M NOT ANGRY!

Upon further meditation, a few interesting facts surfaced. First, I’ve never fully enjoyed driving. Second, I’m particularly uncomfortable when I am navigating new territory. But none of this explains Saturday night’s fierce breed of “mad”. I felt like the character Red in Shawshank Redemption, being released from prison into a truly different world than before, except my new world was a highway full of reckless drivers: There’s the “merge first, look later” approach, not to mention the extreme tailgaters and the speeding motorcyclists using the lanes in between the lanes. It all had me spitting nickels behind the wheel.

Suddenly, I knew what I had to do. I reflected back upon what I learned during one of my own company’s presentation about Anger in the Workplace. Remembering that anger is a symptom like a fever, I dug deep and tried to address what was really going on within me….and voila! I realized that anger was covering up my sense of helplessness and fear on the road. Since I seldom drive these days, I was a little rusty and not at the top of my game last week. I’m also trying, like everyone else, to get used to the results of other people’s digitally distracted driving, and in the process, felt enraged in a way I was not used to.

The epiphany: My instinct was to protect my beloved passenger. Feeling vulnerable and threatened by the unpredictability around me, my response was rage. The solution: Since I’m in no position to hire a chauffeur (although it was suggested), I’ll need to drive more frequently in highway situations to keep my skills sharp. Perhaps a defensive driving refresher course would be in order. And a general rule to anticipate more and take less for granted will go a long way toward eliminating anger while keeping me safe in the driver’s seat.

Do you feel helpless on the road? What are some of your vulnerable moments?