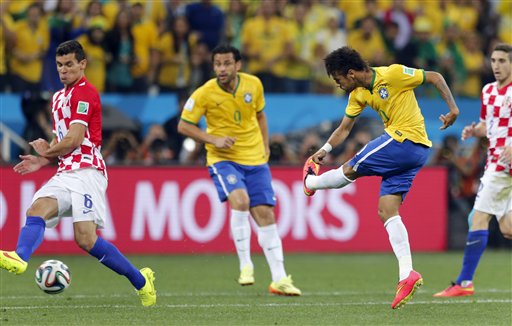 The Watch ESPN streaming service, which lets people stream a wide range of sporting events online or through an app, isn’t available for DirecTV subscribers trying to watch the 2014 FIFA World Cup.

HD-Report reported that “anyone with a Roku, Apple TV, or Fire TV streaming media player can’t authenticate the Watch ESPN channel app for those devices, or even view ESPN programming on the WatchESPN website.”

However, an ESPN spokeswoman told Epoch Times in an email that Watch ESPN is available via authentication for Roku owners, as well as Apple TV, Amazon Fire TV, Chromecast, and Xbox.

The blog points out that Dish has made a deal with ESPN, among other competitors.

“It’s a shame, too, because the FIFA World Cup is one time when live sports are scheduled during the weekday hours and most viewers are away from their home TV,” it said.

“And given the World Cup is every four years, it would have been a great time for the two providers to offer the away-from-home access.”

Croatia outraged over penalty in loss to Brazil

SAO PAULO—Organizers may as well give the World Cup to Brazil right now, according to Croatia’s Dejan Lovren, after the defender found himself at the center of a penalty controversy in his team’s 3-1 defeat to the host nation Thursday.

Brazil striker Fred went down in the penalty area under slight contact from Lovren in the 71st minute, allowing Neymar to convert a spot kick that gave Brazil a decisive 2-1 lead in Thursday’s tournament opener.

Lovren said referee Yuichi Nishimura’s decision was a “big shame” and that “if it is like this, then we can give the World Cup directly to Brazil.

Brazil’s Fred, right, falls after making contact with Croatia’s Dejan Lovren during the group A World Cup soccer match between Brazil and Croatia, the opening game of the tournament, in the Itaquerao Stadium in Sao Paulo, Brazil, Thursday, June 12, 2014. At left is Croatia’s Vedran Corluka. (AP Photo/Thanassis Stavrakis)

“Of course I am angry. I want to cry now but what can you do?” he told reporters. “If you look at the game I think you saw everything. So I don’t need to explain.”

Criticism of Nishimura’s penalty award was shared by Croatia coach Niko Kovac, whose team continues its Group A campaign against Cameroon on Wednesday.

“It was a wrong decision by the referee,” Kovac said. “I think that the whole world saw the big mistake.”

Midfielder Ivan Rakitic added: “This was a great game by both teams and it’s a pity it was spoiled by a bad referee decision.”

Other Croatia players said they were pleased with their performance while expressing anger about the officiating.

“I think that when it was 1-1 in the second half we were quite in control of the game and after he gave the penalty it changed the game,” Corluka told The Associated Press. “I congratulate Brazil, but I don’t think they deserved to win today.”