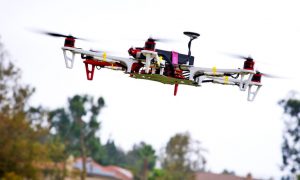 The explosive popularity of drones has had law enforcement agencies in a hurry to catch up with ways to regulating the airborne machines.

In the Netherlands, the police are looking to use trained eagles as a mechanism for taking down unwanted drones, partnering with the private company Guard from Above.

“You can also imagine that people want to create beautiful images of an event with a drone that flies above the crowd. If the drone falls from the sky, can be dangerous for the people,” Mark Wiebe, an innovation manager in the Dutch Police force, said in a statement.

Sometimes a low-tech solution for a high-tech problem is more obvious than it seems.
— Sjoerd Hoogendoorn, Guard from Above

Eagles have the distinct advantage of being able to take down a drone from the sky in one piece without the risk of the drone falling down on people. Other anti-drone measures like lasers or capturing it with a net run the risk these injuries.

“Sometimes a low-tech solution for a high-tech problem is more obvious than it seems. This is the case with our specially trained birds of prey,” Guard from Above founder Sjoerd Hoogendoorn said in a statement. The company claims to the first to train birds to hunt down drones.

The method is still in its testing phase, and the Dutch police will make a decision on whether or not to use the birds of prey in enforcement operations in a few months.

One concern some have raised are the threat posed to the birds’ talons by the drone blades. Guard from Above says that the eagles, which often hunt large animals in the wild, have protective scales on their talons, but are researching the possibility of extra protective gear.