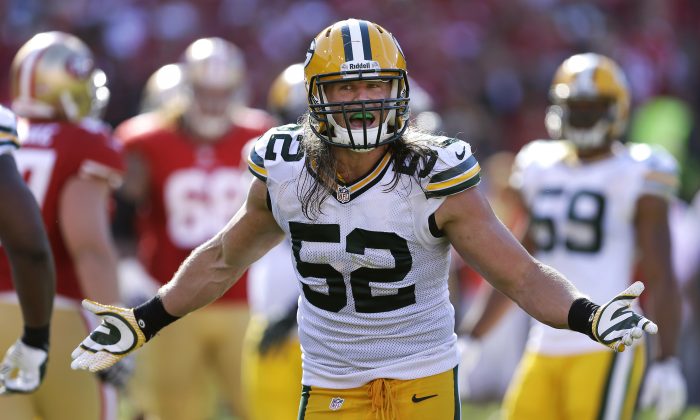 Sadly for the Packers, this may have been their only highlight of the night. In the 2nd quarter, Packers linebacker Clay Matthews hit Cardinals quarterback Carson Palmer to the ground after Palmer threw a pass. Matthews then extended a hand to Palmer—supposedly to help him up, but as Palmer reached toward him, he yanked his hand away, leaving the Cardinals quarterback hanging. See the full sequence of events below.

Like always, there are various opinions on the subject. Most find it an extremely disrespectful act by Matthews, saying it shows a lack of class, honor, and sportsmanship. Others contend it’s not a big deal—it’s football after all, and neither player probably made it to be a big deal.

Jason Peters Benches Himself in 4th Quarter of Loss to Redskins

The pressure was relentless on Aaron Rodgers last night. The Packers quarterback got rattled like he never got rattled before. This was especially noticeable in the 3rd quarter. With the Packer behind big and receivers struggling to get separation in the passing game, Rodgers was a sitting duck in the pocket; you could almost count the seconds on your hands before Rodgers got hit. Wanting desperately to make something happen, but with no means to do so, Rodgers fumbled three times, two of which were returned for touchdowns in the 3rd quarter.

To be precise, the main problems were at the tackle position. Left tackle Don Barclay was feasted on by a combination of Dwight Freeney and Calais Campbell, ceding four sacks, four hurries, and three penalties. At the other tackle position, Josh Walker entered the game in the 3rd for injuried starting right tackle Brian Bulaga, and immediately gave up a sack and four hurries.

The full gamut on the night for Rodgers? Eight sacks for 70 yards lost, three fumbles on those sacks—two returned for touchdowns, two more sacks wiped out by penalties, and 1 end-zone interception.

3. The Cardinals Secondary is Deep

The Cardinals lost All-Pro safety/corner Tyrann Matthieu for the season earlier this week, but did not look like a depleted secondary by any means. With shutdown corner Patrick Peterson shadowing the opposing team’s best receiver, a capable Jerraud Powers on the other side, and Justin Bethel breaking out at slot corner, the Cardinals secondary is still tough to beat.

4. Cardinals may be the best in the league; Packers may not even be an upper echelon team

With the Panthers losing yesterday, the Cardinals still have a shot at the #1 seed in the NFC. In any case, whether its the Panthers, Patriots (who also lost yesterday), or anyone else, there is no football team as hot and as well-balanced as the Cardinals right now.

Meanwhile, the Packers continue to look awful. They may have strung together a pile of wins before this week, but have never looked quite right. In any other year, the problem would be with the defense; this year, the Packers’ offensive issues have been well documented. Whatever the issue, the Packers will be back to the drawing board as they await the Minnesota Vikings next week for the NFC North championship.