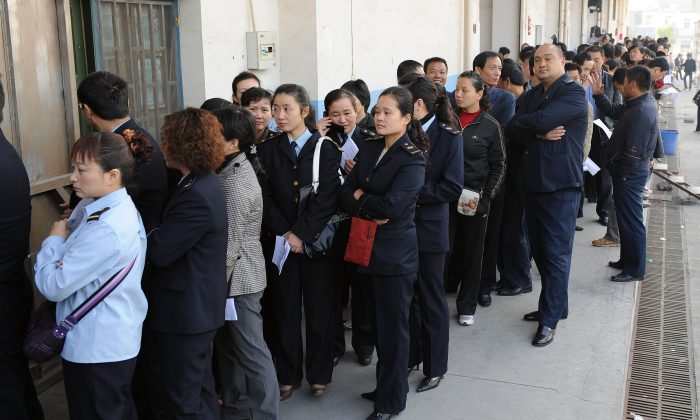 People queue up outside a hospital in Hefei, in eastern China's Anhui province on November 10, 2009. (STR/AFP/Getty Images)
China

A two-and-a-half minute video of a young woman cursing and screaming at a gang of scammers in a hospital wait room went viral in China on Jan. 25, receiving almost 40,000 comments and being shared over 100,000 times on China’s Sina Weibo.

The video features the woman yelling at men who occupied the emergency queue and made a business of selling registration numbers.

In Chinese hospitals there is a significant fee simply to get a waiting ticket. At this particular establishment, the Guang’anmen Hospital in Beijing, the price is supposed to be 300 yuan (about $45).

But when the woman got through the long line, she found that some professionals had their own plans. A gang of people had gathered in the hospital waiting room to cut in line, snatch up registration tickets and sell them to the real patients for exorbitant prices.

According to reports that later appeared in state media, the woman lives in Beijing on a shoestring budget with her ailing mother. She speaks with a distinct northeastern Mandarin accent.

Her voice hoarse with anger and desperation, the woman berated the gang:

“We took the trouble to wait here all day from early in the morning, without being able to get registered,” the woman said. “You ticket sellers, I don’t care if you guys are here for profit, at least you should actually wait in line like everyone else. “

The woman then accuses the ticket sellers of being in cahoots with hospital security, noting how the men gave knowing glances at staff before rushing up to cut in front of her.

The Chinese healthcare system is notoriously difficult for the common customer. Even simple procedures and operations require substantial bribes and the leverage of informal relationships.

Many netizens expressed their sympathy for the young woman. The comment section on Weibo is filled with criticism of the corruption in China’s hospitals.

“Society won’t have much hope until attention on social issues surpasses celebrity news! Don’t think that this has nothing to do with you. Only when you are really in trouble will you see how dark things are, and how insignificant you are! Employment, housing, and health care… when will these problems be solved. I’ll share this not only for this girl, but also for myself,” one netizen wrote.

“If a patient dies in the queue in front of the hospital, society is seriously hopeless,” another comment reads. “This is Beijing, the capital! Uhh, my eyes are watering.”

After the video went viral, the hospital relented and solved the problem for the woman, but later, the state-run Beijing Youth Daily contacted her and reported that she had received threatening phone calls from the disgruntled racketeers.

UPDATE: China Central Television, the state-run broadcaster, reported that evening that the Guang’anmen hospital denied the woman’s accusations as “groundless.”