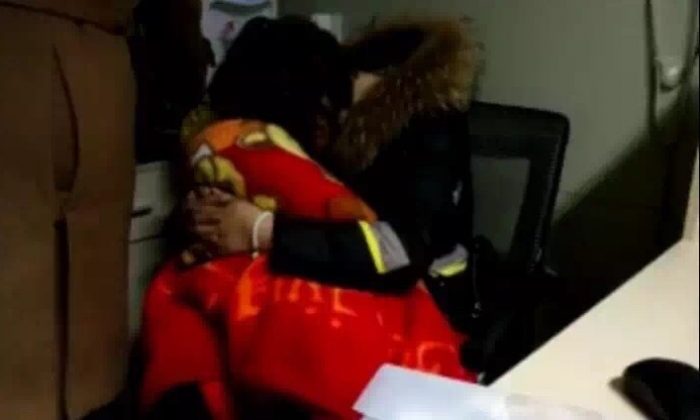 When a family in eastern China took their 3-year-old son to the hospital to treat a slight fever, they didn’t expect that he would be dead in less than an hour.

Even less expected was the veritable platoon of special police that quickly came to seize the body and hush things up. A struggle between the grief-stricken parents, police officers, and hospital staff ensured. Controversy erupted on the Chinese Internet on Jan. 24 when details of the unnamed child’s death and the following fight began to surface on blog posts, an 80-second video, and police announcements.

Half an hour after receiving a saline infusion at the Jiepai Hospital in the city of Danyang, Jiangsu Province, the child reported discomfort and thirst. He vomited after drinking water, and said he was cold. Several minutes later, the doctor pronounced the child dead after “emergency care.”

The child’s mother knelt before the doctor, begging for further diagnosis. She held her son in her arms as his face rapidly yellowed. His lips went from pale-red to white and then black. As she continued to kiss and caress her deceased son, hospital staff called the police, who came in numbers to retrieve the corpse. The mother refused to give it up and was dragged about clutching to her son on the floor for some time.

According to the blog post, the parents believe that their son was a victim of malpractice. There is some backing for this concern. Last December, another 3-year-old boy in Jiangsu also died quickly after receiving an infusion.

In an announcement posted by the Danyang police on their official Weibo social media account, they claimed that the parents had caused disturbances to hospital staff and interfering with the process of transporting the body to the funeral parlor.

Also mentioned were the “disruptive acts” of the family, such as placing flower wreaths, holding banners and burning paper money in front of the hospital (a Chinese funeral custom).

The matter was “resolved” on Jan. 25 when the police “patiently gave advice” to the family, which then “actively cooperated in sending the body to Danyang Funeral Parlor,” the announcement says.

Netizens flooded Weibo with hundreds of comments, the overwhelming majority of them criticizing the police for their treatment of the parents and the body.

“Looking at the police seizing the dead child, with the small body being dragged around the ground, I can’t tell exactly what happened, but I can’t accept this being done to a child that has already left the world,” one user wrote. “I hope the police who were at the scene can be punished and make an apology to the parents.”

Many of the comments were direct in their outrage, like the user who wrote: “What a bunch of beasts! Did you respect the body of the child by dragging it around on the ground? May you beasts be struck down by lightning.”

Others took an arch, sarcastic tone: “Let me fix your post for you,” one poster wrote, mocking the police announcement. The user provided an alternative version, in which the police chastise Internet users who concern themselves with social justice: “An easily avoidable online group incident arose due to our inappropriate mismanagement. This had a greatly negative influence on the national police apparatus and ruined years of public relations efforts.”