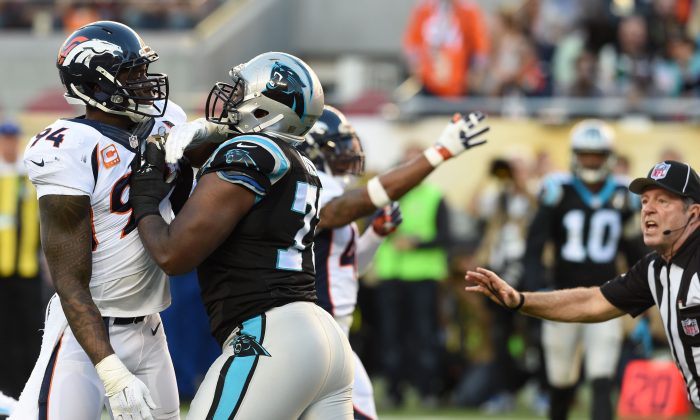 Michael Oher (C) of the Carolina Panthers struggled blocking DeMarcus Ware (L) at times during Super Bowl 50 as he sometimes had trouble with the field. (Timothy A. Clary/AFP/Getty Images)
NFL

The difference between the Denver Broncos and the Carolina Panthers in Super Bowl 50 was basically the pass rush of Denver’s front seven. Denver linebacker Von Miller recorded 2.5 sacks, as well as a pair of crucial forced fumbles, on Panthers quarterback Cam Newton that directly led to the 14-point difference in Denver’s 24–10 win.

Perhaps part of the difference in play is how the Broncos were able to adapt to a new sod that was laid down just before the Super Bowl at Levi’s Stadium and then was beat up by the traditional halftime performance.

However, even before the first quarter was complete, players were having a difficult time with their footing. Check out Panthers offensive tackle Michael Oher trying in vain to block Broncos defensive end DeMarcus Ware while looking like he’s on skates:

Whether the Broncos noticed the issue before the Panthers did is unclear but they were certainly able to adapt well.

Discovering you’ve got the wrong cleats in the 2nd quarter of the Super Bowl is WAY too late.

This is actually nothing new to Levi’s Stadium. The field was re-sodded six times during the season.

They’re having some turf trouble at Levi’s Stadium. Groundskeepers are walking around, picking up and/or flattening chunks of grass.

As I just said on live chat, it’s slippery on Levi’s Stadium turf. At least 2 #Broncos receivers have wiped out making the simplest of cuts.

This is also the same turf that ate up Ravens kicker Justin Tucker’s plant foot on a field goal attempt in October.

While Miller seemingly had no problem on the ground, his teammate Aqib Talib had a different view of things.

“The footing on the field was terrible,” said the Pro Bowl cornerback, via the Associated Press. “San Fran has to play eight games on that field so they better do something to get it fixed. It was terrible.”

Panthers coach Ron Rivera didn’t use the field as an excuse. “Both teams played on the same field. As far as I’m concerned, for me to be able to blame the field is kind of a cop out. The truth of the matter is we both played on the surface. The surface was outstanding.”