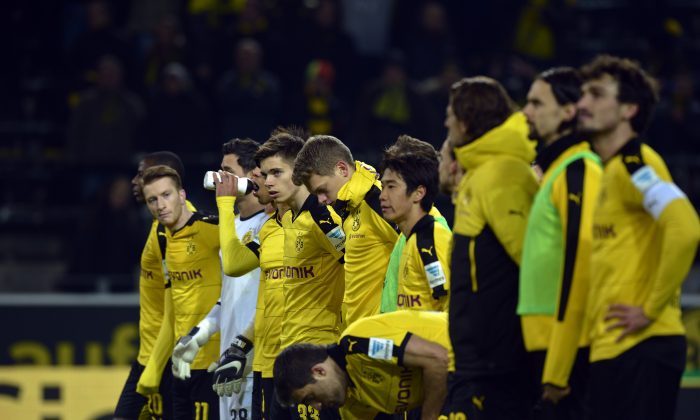 Dormund's players line up to show their respects after the death of a fan during the German first division Bundesliga football match Borussia Dortmund versus Mainz in Dortmund. (Sascha Schuermann/AFP/Getty Images)
Soccer

Borussia Dortmund beat Mainz on Sunday afternoon in the Bundesliga, but the details of the game pale in comparison to the news that a Borussia Dortmund fan died of an apparent heart attack at the stadium, during the first half of the contest. The news made the normally raucous stadium eerily quiet.

There were actually two Borussia Dortmund fans who suffered heart attacks during the game, but the second was reported to be in stable condition before the game ended.

Now hearing that second person is in fact still alive and in stable condition after suffering the heart attack. What a crazy day.

Fans sang “You’ll Never Walk Alone” at the end of the match.

Aside from the tragedy, goals by Marco Reus and Shinji Kagawa led to a 2–0 victory for Dortmund.