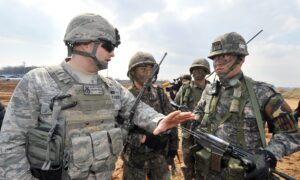 South Korea to Boost Funding for US Troops Under New Accord: State Department
0
Share Now
TelegramFacebookTweetEmailTellMeWeReddit
Copy Link
US

Hundreds of protesters clashed at a protest over a Confederate monument removal on the weekend in Dallas.

Late on Saturday night, Aug. 19, officers in riot gear, and some on horseback, forced hundreds of protesters away from a Dallas cemetery, Star-Telegram reported.

In the midst of the protests, two groups squared off at Pioneer Plaza after a heated exchange that appeared as though it might get violent at any time.

The BLM activists can be heard telling Antifa to leave the city.

After the chanting, a masked, male member of Antifa stands right in front of the BLM activist and hits him in the face. Another BLM activist can be heard shouting in anger and shock that one of their members was hit.

Not long later a young female member of Antifa then starts yelling that the BLM activists were pushing her. Both the female and the BLM activist can be seen hurling insults at each other.

At the end of the video, things can be seen calming down while a BLM activist speaks to the crowd, saying, “We ain’t gonna let some outsiders make us look bad.”

However, Trump added that it was the Antifa protesters who seemed to have started the violence.

“There was a group on this side—you can call them the left, you’ve just called them the left—that came violently attacking the other group, so you can say what you want but that’s the way it is,” he said.