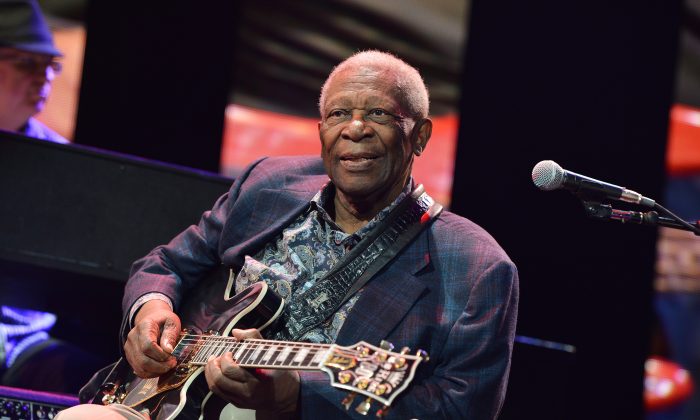 Watch 5 of BB King’s Memorable Performances. The Thrill Is Not Gone

The legendary blues singer and guitarist BB King is gone. He died on Thursday night at the age of 89.

King, who was considered one of the most influential blues singers of all time, earned the title “The King of the Blues.” His 60-plus-year-career spanned generations and music styles, influencing rock and blues singers including Eric Clapton, Mike Bloomfield, Stevie Ray Vaughan, and Jimi Hendrix.

Born Riley B. King on Sept. 16, 1925 near Itta Bena, Mississippi on a cotton plantation, King was the son of a sharecropper. As a child, he sang in the church choir and played the guitar on street corners for dimes. King has said he made more in one night singing on the corner than he did in one week working in the cotton field.

After humble beginnings as a singer and disc jockey, King began recording records, leading to his illustrious career, earning him awards and honors, and inductions in both the Blues Hall of Fame and the Rock and Roll Hall of Fame.

Gone but not forgotten, the music icon’s legendary sound lives on in the recordings and videos that showcase his unique guitar playing accompanied by his soulful, bluesy singing.

A lover of performing, King kept his touring schedules full year after year with performances throughout the United States and the world. He continued to perform well into his eighties and did not stop until illness stopped him in October 2014.

Sit back, relax, and enjoy some of King’s memorable performances.

Eyes closed, face twisted in that signature side-mouthed position, with fingers rocking on the guitar strings, King would passionately tell his baby that he was free and wish her well as he sang one of his most beloved songs, “The Thrill is Gone.”

How Blue Can You Get (Legends of Rock ‘n’ Roll)

Singing to his baby, this song may be telling why King left her when he sang “The Thrill is Gone.” He gave his baby so many things, even seven children, but she didn’t appreciate any it.

A very young BB King entertains incarcerated men in what King considers one of his best performances. He tells them he came to swap some blues with them and then jokingly adds, “I imagine that quite a few of you dudes have the blues already.”

A more mature King sings with Stevie Ray Vaughn, Etta James, Eric Clapton, and others telling everybody why he sings the blues.

Even in his late ’80s, with a new, younger band, King was entertaining huge cheering crowds—young and old—while sitting in a chair and singing, “Tell everybody, BB King’s in town!”