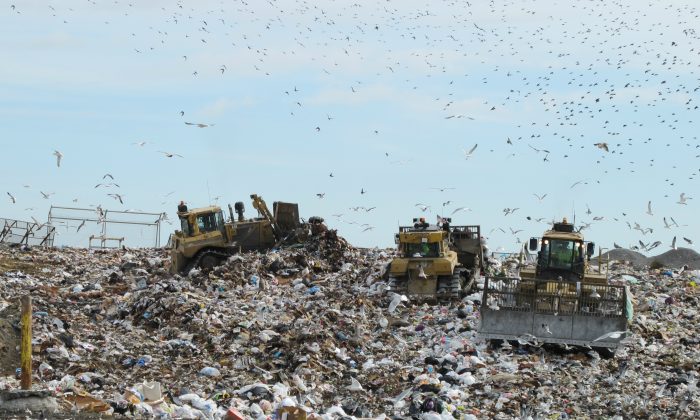 Waste Disposal in US Landfills Underestimated by 115 Percent

Landfills are large sources of methane, comprising about 18 percent of human-made methane emissions sources in the United States, because of the decomposition of waste materials that occurs over long time spans inside of landfills.

With so much waste going to landfills, and our findings that landfilling will continue to be a major way that we manage waste in the future, identifying approaches to reduce greenhouse gas emissions in the waste sector is critical.

Our recent work examined the performance of more than 800 landfills that have active gas collection systems, and we uncovered significant opportunities for emission reductions. In fact, the biggest determinant of highly efficient gas collection systems was whether or not the landfill was closed and no longer receiving new waste. We found that closed sites collected gas about 17 percent more efficiently than sites that are open and actively receiving new waste.

With so much waste going to landfills, identifying approaches to reduce greenhouse gas emissions in the waste sector is critical.

Pursuing emission reductions at landfills aligns with newly proposed regulations by the EPA. The proposed modifications to the municipal landfill rules under the Clean Air Act seek to lower the emission threshold, at which point a landfill must design and construct an active gas collection system.

Moving toward improved waste management approaches, including enhancing the performance of existing sites that will be operating for many years, is not only being reflected in current U.S. regulations. The pope’s recent encyclical called for the abatement of “the pollution produced by residue, including … waste present in different areas” and the U.N.’s Sustainable Development Goals for 2030 contain multiple goals that intersect with the way we manage waste materials in the United States and globally.

Our work clearly demonstrates that landfilling in the United States will likely be the predominant waste management method for the foreseeable future.

In contrast to concerns in the 1980s and 1990s, when there were widespread worries over depleting disposal space, our new study quantified the amount of available disposal capacity in the United States.

We found the total amount of disposal capacity has increased in recent years—in fact, about 2.7 years of new capacity was available annually from 2010 to 2013 based on our analysis. The United States, in other words, can generate trash at its current rate and still find room to landfill it for decades to come.

Landfilling in the United States will likely be the predominant waste management method for the foreseeable future.

The bulk of the data we used in our study was derived from a newly available data set published by the EPA as part of its Greenhouse Gas Reporting Program (GHGRP) law.

Passed in 2009, the GHGRP requires facilities in certain sectors, including municipal solid waste landfills, to systematically collect and electronically report a host of data that is used to calculate the total carbon dioxide emissions at the facility. We were able to leverage a large amount of data and metadata from all landfills subject to the rule—more than 1,200 data sets in all—across four years in our analysis from 2010 to 2013.

So why are our estimates so much greater than the frequently reported municipal waste management data, which is also published by the EPA? The simple answer lies in the methodology.

Before the GHGRP data was available, the best approach to estimate municipal waste management in the United States was to examine material flows within the U.S. economy, which ultimately led to an estimate of how much waste was disposed of, combusted, and recycled. By contrast, the GHGRP data set, upon which our estimate was based, reflected measured, quality-assured data from every reporting facility.

Standard practice at landfills involves weighing every incoming truckload upon arrival and departure, with the difference reflecting the amount of waste that was placed in the landfill.

Aggregate the weight delivered in each truckload in an entire year and you have the data reported by each landfill. We aggregated each facility’s reported data to develop our estimate. There are landfills that are not large enough to be subject to the GHGRP and there are waste materials that are not strictly municipal waste that are disposed of at municipal landfills, such as construction waste. However, we calculated that these amounts are small relative to our total calculated disposal amount.

Another key conclusion, backed by measured and estimated data from hundreds of operating landfills, suggests that emission-reduction efforts must focus on open landfills that are actively accepting waste.

This is not a trivial exercise as open areas at landfills make gas collection through traditional means difficult, and ill-performing gas collection systems can lead to problems. Typically, gas is collected from landfills through a series of perforated pipes that are installed vertically or horizontally within the waste once enough waste is in place to accommodate the wells. Issues from underperforming gas collection systems, such as high-temperature conditions within the waste, can make effective gas collection difficult and can even create conditions leading to pyrolysis or fires.

We suggest a focus on innovative gas collection approaches that capture gas very soon after waste is initially placed in a landfill, among other approaches. At many sites, early gas collection may have benefits other than methane emission reductions. Several hundred sites across the United States beneficially use the energy content of collected landfill gas to create electricity or produce fuels.

It is our hope that this work will be one of many analyses that leverage large, quality-assured data sets in the waste and materials management domain. These can help inform current performance and key in on targets for near-term and long-term improvement, ushering in an era of enhanced environmental informatics.

We expect that future studies will use our data-mining methodology to unearth additional relationships and insights about how disposal facilities are actually operating, helping to inform policymakers, improve analytical tools such as life-cycle assessment, and bring to bear a more sustainable materials management future.