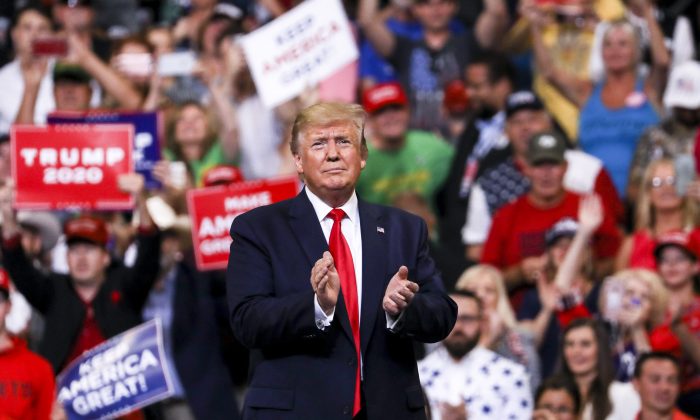 President Donald Trump will give remarks on July 4 during Washington’s Independence Day celebration on the National Mall.

The details of the event were announced on June 19.

“There is no more appropriate place to celebrate the anniversary of American independence than among the Nation’s monuments on the National Mall and the memorials to the service men and women who have defended the United States for the past 243 years,” Secretary of the Interior David Bernhardt said in a statement.

“For the first time in many years, the World War II Memorial and areas around the Reflecting Pool will be open for the public to enjoy a stunning fireworks display and an address by our Commander-in-Chief. We are excited to open these new areas so that more visitors may experience this year’s Independence Day celebration in our nation’s capital.”

The areas that will be open include the Lincoln Memorial Reflecting Pool, the World War II Memorial, and the Constitution Gardens since safety restrictions were lifted for these zones after the launch site was moved to West Potomac Park.

The event, titled “Salute to America,” will honor the nation’s five service branches with music, military demonstrations, and flyovers.

The Old Guard Fife and Drum Corps, the U.S. Army Band, and the Armed Force Chorus are listed among the performing groups.

The events will start with the National Independence Day Parade on Constitution Avenue from 11:45 a.m. to 2 p.m. Trump will lead the celebration at the Lincoln Memorial at 6:30 p.m.; gates for that event will open at 3:30 p.m.

The Interior Department has released the official #4thofJuly schedule of events for the national mall. President Trump’s appearance is scheduled for 630pm, Fireworks begin at 9:07pm pic.twitter.com/S84ubvRodf

At 8 p.m., a concert will take place on the west lawn of the U.S. Capitol.

The fireworks will start at 9:07 p.m. and continue for about 20 minutes.

“Independence Day culminates with a spectacular fireworks display over the National Mall. The fireworks will be launched from West Potomac Park and behind the Lincoln Memorial. They will be visible from locations throughout D.C. and Northern Virginia,” the Department of the Interior stated.

Trump mentioned the celebration during the June 18 launch of his re-election campaign, reported the right-leaning Fox News website.

In February, Trump gave insight into the event planning, writing on Twitter: “HOLD THE DATE! We will be having one of the biggest gatherings in the history of Washington, D.C., on July 4th.”

HOLD THE DATE! We will be having one of the biggest gatherings in the history of Washington, D.C., on July 4th. It will be called “A Salute To America” and will be held at the Lincoln Memorial. Major fireworks display, entertainment and an address by your favorite President, me!

“It will be called ‘A Salute to America’ and will be held at the Lincoln Memorial. Major fireworks display, entertainment and an address by your favorite President, me!” he added.

Some Democrats have publicly complained about the fact that Trump will be part of the events.

“For decades, the Fourth of July on the National Mall has been non-partisan and apolitical. It routinely brings tens of thousands of visitors to our nation’s capital to join in celebration of America’s founding. It is a time for celebration of and reflection on the sacrifices made by our founding generation of men and women to win independence for our nation. It is, therefore, unfortunate that you are considering a conflicting event, which could create the appearance of a televised, partisan campaign rally on the Mall at public expense,” they wrote.

In a statement, Hoyer added: “President Trump’s efforts to insert politics into a celebration of our nation’s history is extremely alarming. Forcing taxpayers to foot the bill for what amounts to a political rally is irresponsible and a misuse of funds. I strongly urge the President to reconsider his proposed event.”