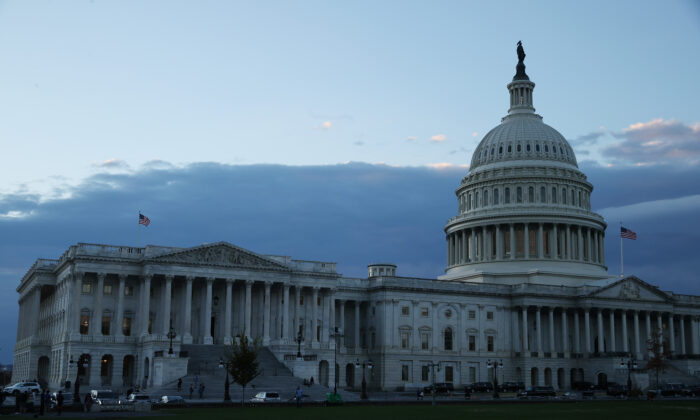 It makes for a depressing reading. The Congressional Budget Office (CBO) anticipates that federal spending will continue to outstrip revenues.

Historically large annual deficits will add to the nation’s already heavy accumulation of public debt so that by 2032, outstanding government debt held by the public will rise to 110 percent of the nation’s gross domestic product (GDP) and then rise further to 185 percent by mid-century, far higher than most any time in history. The driver is the growth of entitlements spending.

The CBO projects that federal revenues from all sources will grow in tandem with the economy, taking, on average, a historically consistent 18 percent of GDP each year. However, the spending side is expected to rise disproportionately from 23.8 percent of the economy this year to 25.8 percent by the mid-2030s to 28.9 percent by mid-century.

And the growth of entitlements lies behind the overall spending rise. Social Security, Medicare, Medicaid, and lesser programs of this sort will rise from an estimated 10.8 percent of GDP this year to 13.7 percent in the mid-2030s to 14.9 percent by mid-century, according to the CBO.

This relative increase accounts for more than four-fifths of the relative rise in all spending. The balance comes from the need for Washington to pay interest on an enlarged debt load, itself the result of past increases in entitlements spending.

History certainly informs this outlook. Federal spending has grown for decades as a portion of the economy. Between 1970 and this year, overall federal spending has risen from 18.7 percent of the country’s GDP to the CBO’s 2022 estimate of 23.8 percent.

As sad as the CBO report is, the picture it paints may be too optimistic. It assumes, for example, that defense spending will hold steady at about 3.5 percent of GDP. It might look conservative to remove from the outlook the past budgetary relief offered by relative declines in Pentagon demands, except that, going forward, developing geopolitical pressures seem likely to raise the relative size of defense outlays.

President Joe Biden plans to forgive student debt. Exact amounts would, of course, depend on how much the government decides to forgive and what income tests it places on recipients. But the White House’s decision indeed points to an increase in the relative burden of entitlements on the economy, especially since it will set a precedent for future generations of indebted collegians.

More significant still is the likely impact of aging. As the huge baby boom generation ages, numbers of dependent retirees will grow. In 1970, roughly 10 percent of the population was 65 years old or older. By 2019, that figure had grown to 16 percent. The Census Bureau estimates that by the mid-2030s, that figure will rise to 21 percent of the population and to 22 percent by mid-century.

This huge proportion of older people can’t help but disproportionately increase demands for Social Security, Medicare, and other federal services, greatly accelerating the relative growth in entitlements spending. CBO estimates try to account for this trend, but probably do so insufficiently.

None of this is to say that entitlements, already at about two-thirds or more of the federal budget, are the wrong way for Washington to spend. That’s a political judgment. Economics can’t judge.

Still, it can make clear that political judgments have condemned federal finances to deficits and ever-growing debt burdens and that they’ll continue to do so until Washington takes one of three admittedly difficult steps: It will either get control over entitlements or accommodate the ever-increasing demand of entitlements by sacrificing other government services, as was done with defense in the past, but it no longer seems possible in today’s geopolitics.

Alternatively, Washington can tell voters that they must pay more taxes so that their representatives don’t have to make these difficult decisions. As the CBO has made clear, albeit indirectly, these are the only ways to avoid a debt burden that many already describe as unsupportable.